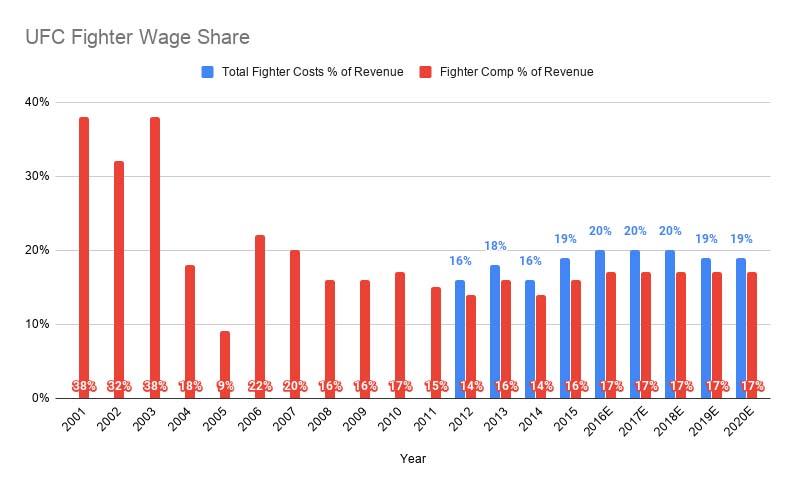 “As the revenue for the business increases, it has only benefited that business, and we’ve grown and the sport has grown and fighter pay has grown too. As I said, how much it’s gone up since 2005.”

But in spite of having raised the pay – the athletes are still severely underpaid. You can see from the chart above that the athletes are compensated with just 18% to 20% of what an event brings in.

Still, some UFC top fighters are doing well for themselves. The highest tier of UFC athletes reportedly has an income between $500,000 and $3,000,000 per showing. But a championship belt doesn’t necessarily equal a big payday. And having two belts isn’t worth much either – just ask Henry Cejudo.

One of the most popular UFC ring girls is the infamous Arianny Celeste. Celeste is reportedly worth $4.5 million. Celeste is one of the most famous ring girls thanks to being with the UFC for quite a long time. The 36-year-old model has been carrying round signs for the promotion since 2006. She also earned Ring Girl of The Year honors 6 times at the World MMA awards.

Obviously, her income does not only come from the UFC. Arianny Celeste is well known to be a professional model. She featured in Playboy Magazine, Sports Illustrated, and FHM. Additionally, Celeste also has an OnlyFans account, a content subscription service. Having gone into onlyfans with a substantial fanbase Celeste is bound to be in the top 1% of earners n the site.

In addition to this, UFC ring girls earn quite a lot of money considering how brief their exposure is. For PPV events, they are rumored to make between $1000 to $5000. Considering that ring girl engagements aren’t physically demanding the gigs can stack up to a substantial lump sum. This has caused a rift between athletes and the ring girls in the past. Celeste often stood up to defend the ring girls against criticism, in particular that of Khabib Nurmagomedov.

But regardless about how you feel about the morality of eye candy on a PPV, it’s interesting to observe Celeste’s estimated fortune surpasses that of two division champion Amanda Nunes. As we mentioned, Celeste is worth $4.5 million while the ‘Lioness’ is worth only $4 million after 9 years in the promotion. Nunes was also the part of that ill planned Ronda Rousey comeback – but failed to secure a major payday. In the fall out from the event, UFC also failed to promote Nunes in any sort of substantial way.

Amanda Nunes is widely regarded as one of the best female fighters in the world. The 33-year-old Brazilian has had an amazing 12 win streak and was undefeated for 6 years. She also reigned over the bantamweight and featherweight division. Unfortunately, in her last fight she sufferered a surprising loss against Julianna Pena.