While wrestling for the Egyptian national team, Abdelwahab was able to win by split decision despite some thrilling foot-to-foot combat in the opening two rounds. Should also be noted that y Abdelwahab took this bout with 12 days notice.

To make matters worse, the ref stood up the bout during an active wrestling sequence.

FOTN so far… ref tried his best to take the round from Abdelwahab…. It goes to the judges… and the winner is… #UFC277 pic.twitter.com/qC9Mqh0Di9

‘That’s crazy, this position was taken from him and he earned it’ Joe Rogan narrated when the ref opted to stand up the athletes.

Despite the fact that most believed Hamdy Abdelwahab had done more than enough to win the round, athletes and fans have responded to the news that one judge awarded the third round to the American Mayes.

Masvidal tweeted: “The judge that scored that for Mayes needs to find another job asap #UFC277”

Sports agent Malki Kawa also voiced his displeasure with the results of the third round.

“What the f**k was that judge watching”

Welterweight Belal Muhammad congratulated the debuting Egyptian on a solid performance in the UFC octagon despite having just 12 days’ notice.

Some of the other tweets by fans are mentioned below:

“Mayes sucks, given a shot with a minute left and literally looked at opponent and did nothing. Probably should be cut after that performance #UFC”

Mayes sucks, given a shot with a minute left and literally looked at opponent and did nothing. Probably should be cut after that performance #ufc

“Split decision. No. That should have been unanimous. #UFC277”

“Is that judge on d**gs no way in hell Don’Tale Mayes won that 3rd round. He was on his back the whole time until the ref helped him out #UFC277”

Mayes won based on the criteria imo. Was closer to finishing and did more damage. Simple as that. The standup was really dumb but you don't judge on that

Mayes currently has a record of 9-5. On the other hand, Abdelwahab is still unbeaten at 6-0. 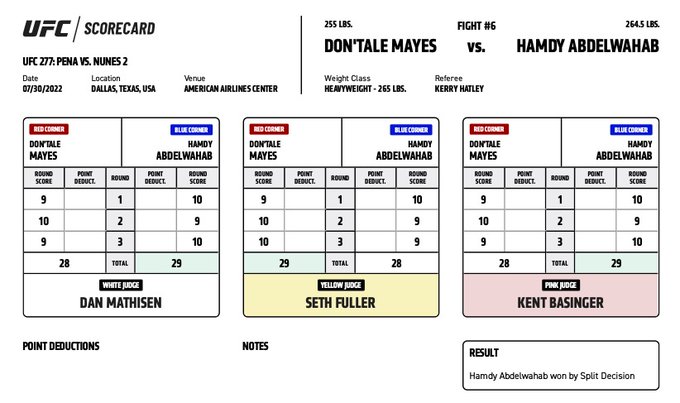