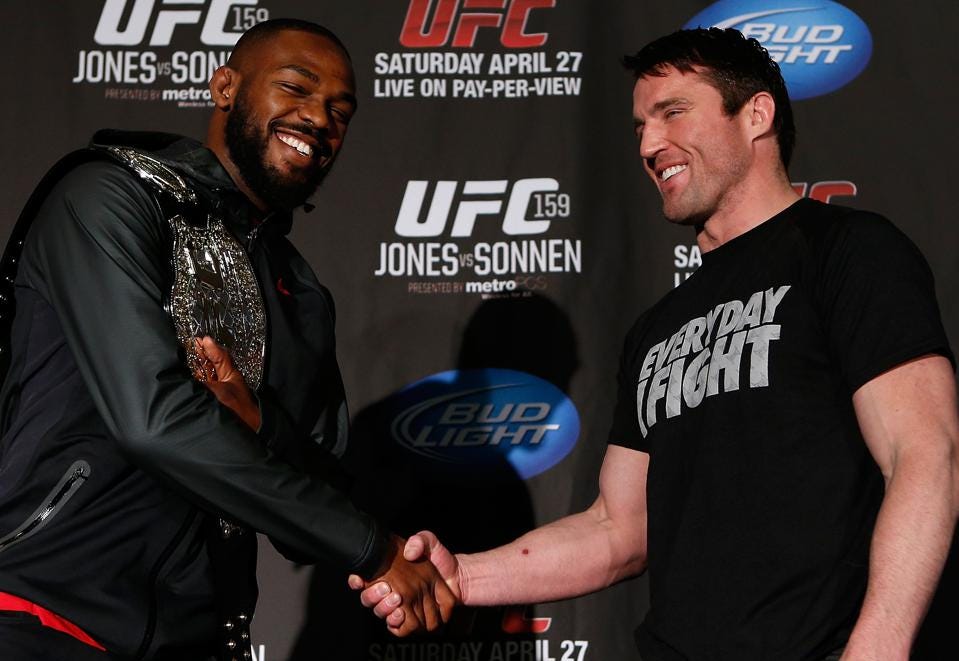 The American Gangster Chael Sonnen has never been afraid of a controversial take. The former UFC Champion Sonnen even once defended Diego Sanchez snake oil salesman Joshua Fabia – just because he knew someone who knew someone who once wrestled with him.

The latest fascinating take from a fact checker’s nightmare Chael Sonnen states that Jon Jones’ punishment is not getting cut from the UFC.

Sonnen ranted on his channel:

“If Jon were to be released, I understand his value would diminish tremendously. His value is only worth whatever the market brings. If the biggest player goes out, your market comes down. All the same, you’re back to being active,” Sonnen explained in a recent video he released on his YouTube channel.

“In some ways, if you’re one of those negative people that just want to punish Jon, you may wanna rethink this whole pressure on Dana to release him. Keeping him right where he is, freezing and/or suspending the contract but keeping him under contract, keeps him unemployed. That’s a damn big punishment. In all fairness, that’s a damn big punishment.”

But Sonnen’s take is so bad it’s partially true. For one – it’s undoubtedly a punishment for Jon Jones to stay in the UFC. Just look at Georges St Pierre – St Pierre’s UFC contract is Still active. In fact the promotion stopped the 39 year old from taking a lucrative boxing fight just several months earlier.

St-Pierre, who has not fought for the UFC since he submitted Michael Bisping to become a two-division UFC champion in 2017 — after four years away from the octagon — remains under UFC contract to date.

In July, St-Pierre spoke about his contract with the UFC, telling Sports Illustrated he planned on participating in combat sports when that deal expires in “almost two years.”

So in many ways – Jones is actually financially punished by having to honor his contractual agreement. And there’s 0 chance the UFC will release him because their other bankable stars are mostly retired – Rousey has long abandoned the UFC, McGregor can’t seem to stage a comeback – and he’s least likely to have to with 130 million in the bank, and Khabib resolute to retire.

This kind of a stranglehold on the paying audience is forcing UFC to pressure aging stars like Nick Diaz into an unprepared comeback.

And lastly, Sonnen would have us back off the old boss. Dana has enough on his plate – with his boss Ari Emanuel having to address the pesky fighter pay issues as well.

“I would really encourage you, lay off Dana. Dana did nothing wrong. When I say Dana, the entire UFC, they did nothing wrong. They did something very nice. They put on a beautiful event. They welcomed him and recognized him. They’ve done everything right,” he said.

“So please don’t turn the gun on them as they’re trying to process this.”