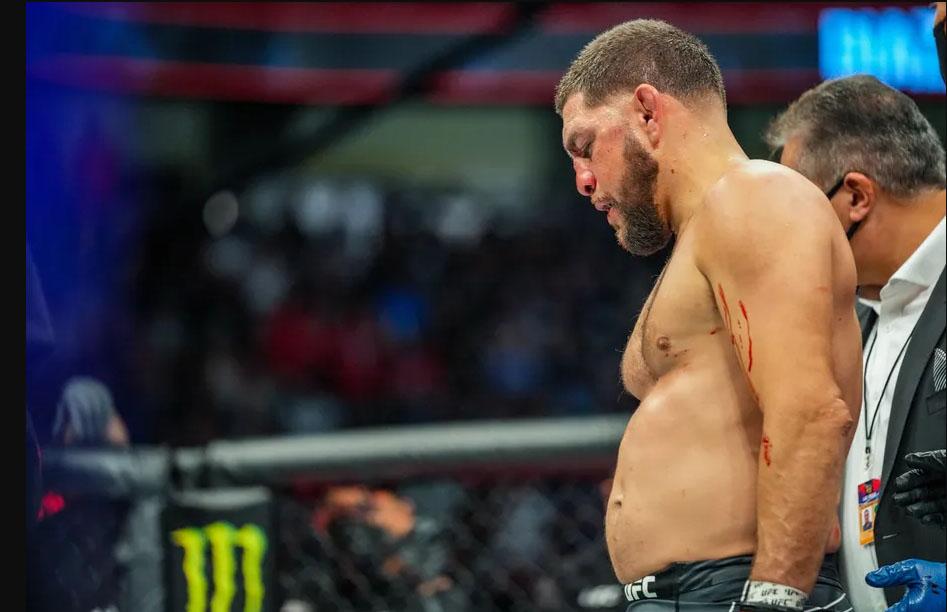 Dana White just can’t catch a break – not only is he constantly made to address bleak fighter pay but he also has to justify whatever that Nick Diaz return we witnessed was.

“I thought Nick Diaz looked incredible, considering he hasn’t fought in (six) years. I don’t know what I was expecting. You never know what to get with the brothers. But let me tell you what, with a (six-year) layoff, I thought he looked unbelievable,” White told the press at Tuesday’s Contender Series event (h/t MMA News). “That first round — and I don’t know if you guys saw Robbie after the fight, but Robbie had friggin’ knots and lumps all over him. Those two went to war. The fight itself exceeded my expectations because Nick hadn’t fought in five years. I thought Robbie was just gonna go out there and buzzsaw through him. And that was not the case.

“Those are the kind of things I expect from the Diaz brothers,” he adds of their on-and-off-again relationship with fighting. “But I don’t know. I honestly don’t know the answer to that question. But he looked damn good. That kid’s got a massive heart. He’s obviously a super-talented fighter. And yeah, I was impressed.”

This performance evaluation is in contrast with – what most of us including MMA pros were watching:

Looked like someone who had to fight, not someone who wanted to fight. Obviously, he told us that beforehand and he wasn’t lying. Still, admirable effort from Nick Diaz. Legend. Represented himself fine tonight I thought, given the circumstances.

City Kickboxing coach Eugene Bareman was quite candid in an interview with Submission Radio in his estimate of Diaz following the fight:

“I’m a little bit disappointed, I guess,” Bareman said (transcription via Denis Shkuratov). “I mean, I came through the ranks watching Nick Diaz. And a guy who’s been out that long and apparently had six weeks to train with—Was it six years, I think? And then why did he only have a six-week training camp? That’s crazy. You can’t do that to someone.

“As good a fighter as he is, which he showed, he should never have been in there. He should never have been in there. And we can speculate about the reasons he was in there. He was obviously a big draw, he brings a lot of eyes to the sport, to the pay-per-view and stuff, but you can’t have six years off, jump in against someone who’s been regularly fighting, someone who’s as good as Robbie Lawler, do a six-week training camp and come in there and expect to perform.”

“It was only the legend of Nick Diaz and just his natural ability and heart that kept him in that fight as long as it did,” Bareman said. “You could see that he was just out of shape and he just wasn’t conditioned or ready for the fight.

“I’m not gonna speculate whether that’s because he’s gotten old, for the moment it’s a better guess for me to say it was just because he had six years off and he had a p*ss-poor training camp. If he has that magnificent training camp, gets plenty of notice, he’s got one fight under his belt and then he comes in and has a fight and you can see some neurological signs of deterioration and you can see some of those things, those telltale signs of someone who’s a little bit too old for the sport. If you see that in his next fight after his training camp, then we can start to make some conclusions on that, but for now, the reason we saw what we saw I think we have to put it down to six years off and a very poor training camp. You can’t come to the conclusion that it’s just ‘cause he’s old or neurologically damaged.”

Diaz personally addressed his performance saying in his post fight speech “he had it coming”. Perhaps more light shed on this and just why White is so happy with the performance comes with how the fight was set up to begin with. In interview With Okamoto Diaz said:

“But, no excuses. I had it coming and he was in great shape. I knew I was leaking here so I didn’t want to make too much of a mess. I’m glad to be back, I’m glad to put on a little show for you.”

Long time member of the Diaz posse explained on twitter just what happened and why Diaz had such a short fight camp – for a five round fight.

Whatever happened to Diaz, only him, his team, and the UFC know – and clearly UFC is happy about how it went down.