Khamzat Chimaev just scored another impressive victory in the cage. The Chechen athlete came into UFC 279 as a real heel. The fans turned against him after his gross weight cut mishap that resulted in him missing Welterweight by 7.5lbs and coming in at 178lbs.

To make matters worse, Chimaev makes for a compelling villain and is thoroughly unapologetic about his own failings.

UFC Lightweight Matt “The Steamrolla” Frevola was among the first to accuse Chimaev of using a dirty tactic to score his takedown.

But despite the initial impression, processed footage of the incident reveals a different picture.

Chimaev was confronted by the theory during the press conference. He was once again unapologetic and explained that he wasn’t looking at Holland’s hands.

“How are you going to see it? I wanna take off his head and I’m going to watch his hands. So I why they’re watching on my head, you know, what is his head? So I don’t know. So we’re always people find some funny things to say. I don’t know. So you want to go back? We’re going back and squeeze his head off again.”

Frevola recounted his accusation when confronted with the footage. 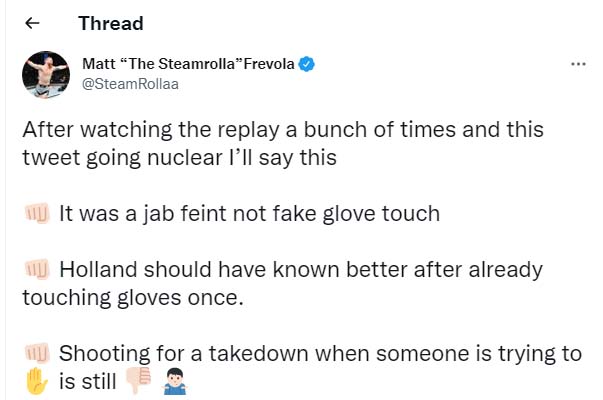 Dana White was peculiarly enthusiastic about Khamzat despite both the weight miss and the cancelled presser.

“I don’t know if anybody expected (Khamzat) to do exactly what he did. You don’t know what to expect from that guy, wrestle him to go out. And this is like his fourth fight that he’s never even taken a punch.”

“And I don’t think anybody expected that, especially against Kevin, who’s six foot two, you know?”

When asked how do you put Chimaev in a title picture if he misses weight by that much White explained:

“That’s a problem that he missed weight. We got to we got to look at it and figure it out. And, you know, what makes sense is for him to be at 180lbs So we’ll see”