Paddy Pimblett is a rising star in the UFC. Recently, he defended Liverpool supporters who booed the national anthem after their FA Cup Final triumph over Chelsea.

What many don’t know is that Liverpool fans have a lot of resentment toward the government and the royals due to the whole “Justice for the 97” debacle.

What is Justice for the 97?

This relates to a famous 1989 incident in which 97 Liverpool fans lost their life in a fatal accident at the Stadium. This is a controversial event in Liverpool history.

Why did the crowd boo Prince William?

The accident came to happen when a Police commander made an error that lead to an influx of fans ultimately rendering the stands overcrowded.

Initially police fed the press false stories suggesting that hooliganism and drunkenness by Liverpool supporters had caused the disaster.

It wouldn’t be until 2016 when the second coroner’s inquests ruled that the supporters were unlawfully killed due to grossly negligent failures by police and ambulance services to fulfil their duty of care.

In the past Paddy  Pimblett led a singalong of Justice for the 97. Previously he did the same thing after he won the Cage Warriors title.

Jurgen Klopp’s team won their domestic cup double with a 6-5 penalty shootout win against Chelsea in the 141st FA Cup Final after the scores were level after extra time.

The traditional anthems, which have been part of the build-up to the showpiece event since 1927, were booed loudly by Reds fans at the west end of Wembley Stadium.

During both God Save the Queen and Abide with Me, Prince William, Duke of Cambridge, was the target of jeers.

“The embarrassing thing is you know exactly why it gets done you are just coming on here to tweet about it for a reaction like a six year old kid, badly need to grow up you, you know fella.” Pimblett tweeted in response to ex-footballer Curtis Woodhouse. 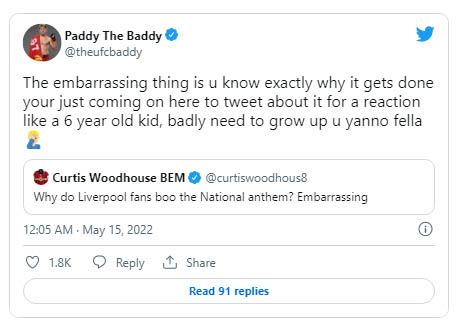 Woodhouse had questioned the reasoning behind the fans’ actions.

Later, the 27-year-old continued: “Why are you even questioning why we boo it then? If you understood you wouldn’t even be asking that question.”

Like House of Commons Speaker Lindsay Hoyle, leading politicians were quick to denounce the supporters’ antics inside the national stadium, writing: “I utterly condemn any fans who booed Prince William at Wembley today.”

“The FA Cup final should be an occasion when we come together as a country. It should not be ruined by a minority of fans’ totally shameful behaviour. In this year of all years – the Queen’s Platinum Jubilee – this is dreadful.”

Leader of the Liberal Democrats, Sir Ed Davey also had his say: “We have the most wonderful Monarch and those fans who booed do not represent their clubs or our country.”

Pimblett has been a lifetime Liverpool supporter who routinely records himself at games for his YouTube account.

He was not in attendance at Wembley but was able to watch from the United States, where he was on a whistle-stop PR tour with fellow Liverpudlian Molly McCann.

Later this year, Pimblett will return to the  UFC octagon. Following the success of UFC London, Dana White confirmed the promotion will be returning to UK this year.

The rising star won his last at UFC London, choking out Kazula Vargas in the first round. Since then, the popular martial artist gained a tremendous amount of weight after a junk-food binge.

He’ll be back later this year, with the promotion hosting another event in the United Kingdom on July 23, with colleague McCann also in action.