Nate Diaz has been in a vicious battle with the UFC brass. Longtime UFC athlete is one the last bout of his contract and would like to become a free agent. This is something the UFC vehemently opposes and they tend to bench guys who refuse to extend their contract before the previous one is fulfilled.

With the arrival of 4.20, Diaz was very irked at the UFC NFT play. UFC’s official NFT partner UFC Strike NFT posted about a new collection featuring Nate and Nick Diaz on a stoner holiday basically.

This is particularly egregious considering that Nick Diaz was suspended for 5 years over pot use. 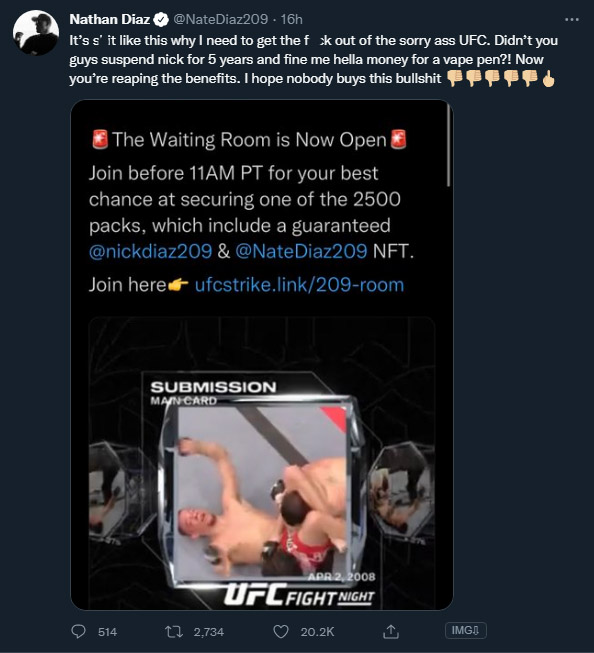 UFC Strike NFT was particularly ruthless in its marketing further capitalizing on the Stockton zip code: ‘Have a NET spend of $209 on the UFC Strike Marketplace from 4/20 at 11 AM PT to 4/27 at 11 AM PT and receive $42 in Dapper Credit.’

As if this wasn’t enough, other prominent voices in MMA were quick to point out that the UFC structured the deal with Dapper labs different from NBA and other mainstream sports – so that the core organization ie UFC alone receives a lump sum ahead of the deal and then cut in the athletes at 50% of what they’re getting – which is 30% of the sale.

Nash commenting on what the cut UFC gets from Dapper labs, that is about half of what entities like the NBA get… UFC likely got a big upfront payment (which the fighters don't get a % of) instead, which is why they are willing to give the fighters 50% of sales… https://t.co/dLWZS0M4Nr

Despite Diaz’ protests Dapper labs as successful in monetizing the 420 Diaz theme push. They announced that the 2500 item collection was sold out.

The 209 Drop is Officially Sold Out!

Take advantage of our Marketplace promotion if you missed out on the drop, details below. https://t.co/cWAE3m2JoN