Kamaru Usman has been campaigning hard to generate interest for a potential boxing cross over against Canelo Alvarez. Usman comes from a wrestling background and isn’t really the best striker in the division – but he’s vastly improved compared to where he was couple years ago thanks to his coach, Trevor Wittman.

Usman and his manager have been using a proven UFC tactic – and calling Alvarez a chicken and a coward. This prompted a wild reaction from Showtime president Stephen Espinoza who basically slammed the entire UFC organization in process including UFC president Dana White. 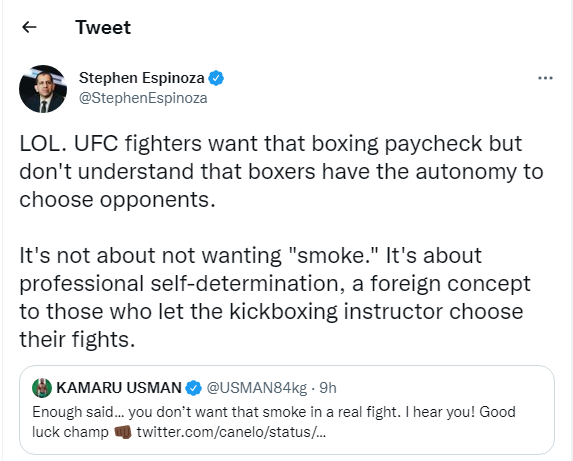 Espinoza’s comments come a day after Alvarez snubbed Usman’s manager who attempted to call him out on social media. 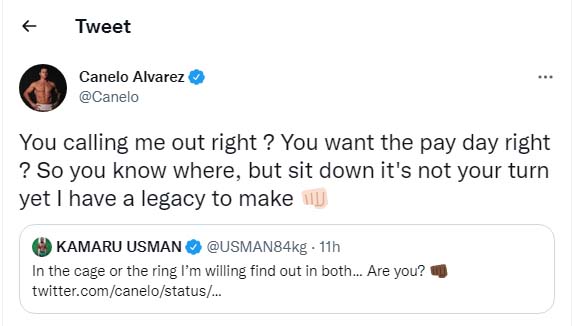 And yet Usman wasn’t ready to give up.  He responded to Stephen Espinoza by saying:

“Boxing is a beautiful “Art” with some amazing athletes, and even a couple of good promoters. The problem is low lives like you that are around the sport that has destroyed it for everyone. Take notes from What Dana has done.”

“Our fans know who the best is because “The best fight The best” not run & hide and fight nobody’s with those plastic belts & call themselves “super champion”. Keep quiet next time & if you need lessons on how to save that dying sport let me know I’ve got Dana on speed dial” 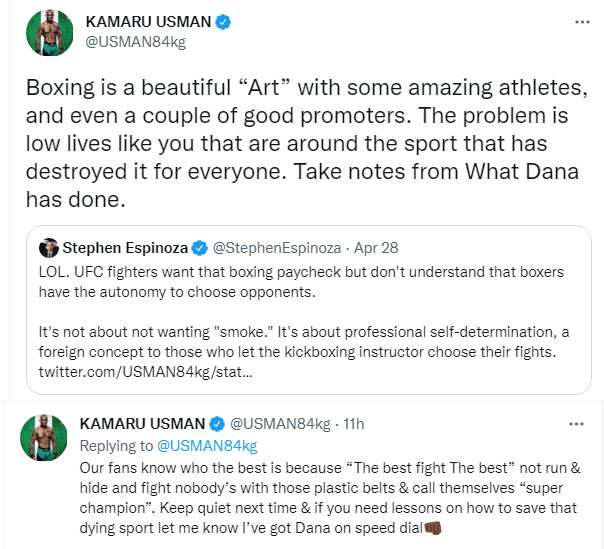 But despite what Usman is saying – he is still hardcode campaigning for that payday. This prompted MMA analyst extraordinaire Jack Slack to destroy Usman in under 144 characters.

In the end, this is very hard to argue against considering every major current and former UFC contender is hell bent on getting into a boxing ring.