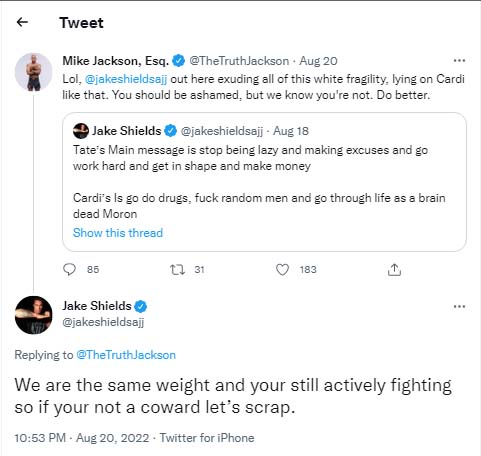 The two first confronted each other in August. But things hit a new level once Jake Shields and Mike Jackson saw each other at the UFC Performance Institute. There they had a physical confrontation Shields shared on social media.

Both Mike Jackson and Jake Shields concur that their argument began on Twitter. They accused one another of being violent at the UFC Performance Institute on Friday,

Jackson and Shields had separate phone conversations with MMA Fighting. Jackson said that Shields spat on him twice before Shields and another teammate assaulted him. This resulted in a brief grappling match that was captured on camera.

According to Shields, after he challenged the UFC welterweight in the PI’s cage, Jackson swung a punch at him. This started the physical altercation between them. Both accuse the other of fabricating the events that led up to the confrontation.

According to Jackson, Shields has been barred from the UFC PI as a consequence of the altercation. Shields intends to file an assault claim as a result of the video being released.

Jackson said, “We’re in a professional setting. I didn’t really think he was going to jeopardize his role at the PI, but I guess he didn’t give a f*** about that. The fragility in him, the white nationalist in him, was like, ‘Nah.’ That’s on him.”

Shields admitted that he was in the wrong for instigating Jackson at the UFC’s training facility. He claimed he was upset by Jackson’s characterization of him both in person and online and that he felt his reaction was fair.

He admitted that he had crossed the line and expressed hope that he might make amends with the PI.

“I know I was out of line, so hopefully, I’ll smooth it over with the PI. I know I shouldn’t have done that. But the guy had for months just been popping on my Twitter and calling me a Nazi, which is complete defamation.”

“I do business with Jewish people, and so they’re calling me a Nazi, and people that know me know I’m not that way, but what if I didn’t know these people I was working with? I could lose big business deals if he’s sitting there telling people I’m a Nazi and a white supremacist. It’s such a slander. I could sue him for defamation.”

Jackson said that the posting of the video was a step too far. Before Shields made the exchange public, he had no intention of calling the police After pointing out what he claimed to be racist conduct, he claimed that he was attempting to protect himself.

Shields laughed off Jackson’s intentions to file a lawsuit.