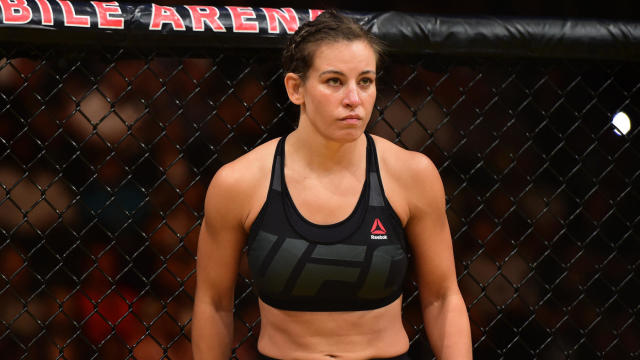 Miesha Tate came back to UFC recently following a stint as a ONE FC promoter, personality and coach. For those who don’t remember Tate had captured the 135 lbs title following Ronda Rousey’s disappearance from the scene. She went 4 rounds with then champion Holly Holm and captured the belt and put Holm to sleep in what was one of the best fights of the women’s bantamweight division.

Very soon after Tate seemed to take a back seat. She had opted to focus on motherhood, and seemed to have received a lucrative offer from ONE FC owner’s own Fight Team Evolve. The offer included training at team Evolve and relocating to Singapore for 2 years. There Tate would often commentate and would try to provide entertainment programming to very little success. Two kids later she returned to Las Vegas. It appeared that she was still under UFC contract so the next logical step was to see if there was interest in a comeback fight. And of course there was – after all the women’s bantamweight division championship belongs to Amanda Nunes who is a spectacularly good fighter – but is also somewhat less marketable than her predecessors Rousey, Holm and even Tate, we speculate.

This meant that Tate would be coming back. According to reports she made around $200 000  for her comeback fight. And well, 200 000 is still a far cry from the typical UFC contract. But it seems as Miesha is ready to continue when the ultimate company man Daniel Cormier left off. This is the only thing that could’ve lead her to make the following statement in our opinion:

“My whole fight purse was gone – show and win for this fight,” Tate said. “I at least spent, had to be about 98 percent – at least. So maybe I walked away with a little bit. But out of $200,000, yeah, I’m just lucky I made a ($50,000 “Performance of the Night”) bonus to be honest. I’m serious. That’s how much it costs. You take taxes off the top, 70 percent of my fight purse is gone immediately right off the top. So I have 30 percent to work with, and that 30 percent I take to buy my organic foods, to get whatever training gear, heart-rate monitors, whatever other things that I need to invest in to make the camp go well. And it’s expensive. It’s very expensive to eat like that. It’s very expensive to just facilitate the things that I need to do.”

And this is, quite frankly very shocking. For starter, regardless of where you live if you’re giving 70% on taxes you need to rethink hiring an accountant and better make it a fiduciary.

Secondly Tate is a Las Vegas native – is she not welcome at the UFC Performance Institute? Doesn’t that defeat the whole point of having such an elite facility if a local fighter and a former champion at that can’t even use it?

Tate went on to stress that the real money is the belt – ie negotiating for the PPV points when you’re the champion. But she was the champion – does she not have any negotiating power? Oh right – UFC sees “champion” as more of an award bestowed upon a fighter.