Conor McGregor has yet to be tested in 2022. The former two division UFC champion is conveniently absent from the USADA pool while he takes time to recover from life altering injury he suffered during his third clash against Dustin Poirier in July of 2021.

McGregor is speculated to be taking a lot of PEDs in order to make sure he can even come back to UFC. As the sport’s biggest superstar he counted on USADA allowing him to exploit every loophole and it looks like they’re even making a new rule for him.

As a reminder, Chris Weidman suffered a similar injury and has not competed since. Anderson Silva also went through it – and he was never the same again although he was highly functioning mixed martial artist until he retired.

While there are rumors circling that TJ Dillashaw retired for the same reason as McGregor – to facilitate a fast recovery for his injured shoulder, MMA’s leading journalist debunked the claim that DIllashaw is looking to exploit the USADA loophole:

“Just spoke to T.J. Dillashaw as a manager. Tiki Ghosn, who’s been with him for quite some time. And he informed me that that is accurate, that T.J. Dillashaw notified the UFC within the last two weeks that he was planning on retiring.”

“Basically around a month ago, he had the shoulder surgery coming off the Aljamain Sterling fight. And afterwards, when he met with his surgeon, the surgeon told them that it’s going to be a long road and there’s a chance that he might need a second surgery down the line, that it’s a very delicate injury, that it’s one of the worst injuries to a shoulder that that particular surgeon ever seen.”

“And basically, for a guy who has been through a lot over the last few years, not to mention multiple surgeries on his shoulders, on his knee, that felt like a very daunting task. And so perhaps emotionally or not, we’ll find out in due time. He told Tiki that he wanted to walk away, that he had had enough, and it came as a shock to both Tiki and to the UFC, I’m told.”

“But they did inform the UFC within the last two weeks, week and a half or so, that his decision was to retire. Obviously going to rehab, try to get back to 100% and who knows what happens down the line. But as of right now, T.J. Dillashaw is retired. And that’s why you saw the tweet that he was removed from the rankings as well.”

“A change of heart. A turn of events, perhaps, that he didn’t expect. And somewhat, you know, unfortunate and unceremonious end to a decorated career.”

TSN’s Aaron Bronsteter recently posted a statement from USADA detailing that Dillashaw is no longer in the USADA pool:

“Given that the UFC has commented, USADA can confirm that we received notice of Dillashaw’s retirement, and he is no longer enrolled in our testing pool,” the statement begins.

“In the event of an athlete’s return to the UFC from retirement, they are required to remain in the USADA testing pool for six months before they are permitted to compete.

“The UFC may grant exemption to the six-month written notice rule in exceptional circumstances or where the strict application of that rule would manifestly (be) unfair to the athlete, but in both cases, the athlete must provide at least two negative samples before returning to competition.

“Upon being added to the UFC Anti-Doping Program, athletes are also required to declare prohibited substances they have used in the previous 12 months, prior to being in USADA’s testing program.

“An athlete who makes such a declaration, depending on the substance, will be required to refrain from competition for a period of at least six months and provide at least two negative samples to ensure that they do not compete in a UFC bout with a performance advantage.” 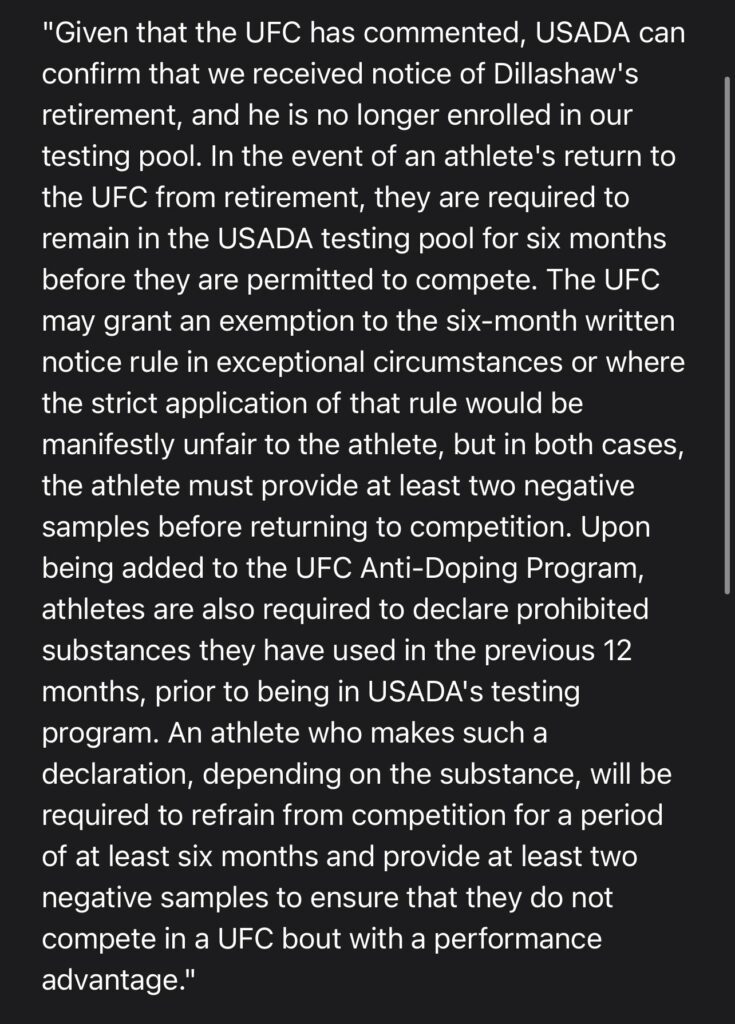 McGregor was mildly amused to learn about their statement: