Dillon Danis made a fuss yesterday in an interview with Chael Sonnen. Danis went on to share KSI was trying to add ‘fishy’ clauses to the contract and to force him to be a certain weight the day after weigh ins which isn’t a common practice.

He went on to cast a shadow over the event and say the bout might get cancelled.

KSI’s manager responded to Dillon Danis’ complaint regarding a rehydration clause on his contract. He removed the clause from the contract, leaving Danis with no excuse to back out.

The pair will exchange blows in January of next year at the MF & DAZN X Series 004 event. The event will be held in London, England at the OVO Arena. However, a few days ago Danis complained about a clause in his boxing contract.

In the initial contract, Danis was prohibited from regaining more than 4 pounds after the official weigh-in. This is mainly to avoid Danis from rehydrating for the event.

Several athletes, especially in MMA, would cut weight pretty far from their “normal” weight. The goal is to gain a significant size advantage during their showdown, as their body would rehydrate after the official weigh-in.

Danis found this clause to be unfair. During a talk with UFC veteran Chael Sonnen, Danis said that he might not be able to stop the rehydration. He also called KSI “scared” for making this rule.

“I think they’re starting to get scared. I think they saw clips or people like you saying I was going to win. They’re trying to make weird things in the contract now two weeks before. I feel like they’re looking for a way out.” Danis said.

He added, “If they want to go and make all these stupid rules in the fight [they can]. It’s not a professional fight so they’re trying to do everything [to] handicap for me.”

Luckily, this clause won’t be a problem anymore. KSI’s manager recently took to his Twitter account to confirm that they will remove the clause.

“Ok how’s this…even though you signed and agreed to the contract 2 months ago…. We will take out the rehydration clause entirely so you have no excuses left to back out now. Nowhere to run. [Dillon Danis] Let’s run it!”

“JJ will fight Danis who was well over 200 lbs in Austin, Texas. No rehydration clause! Unlike someone who canceled their fight for the same reason. Suck that ‘dweeb’.” He wrote. 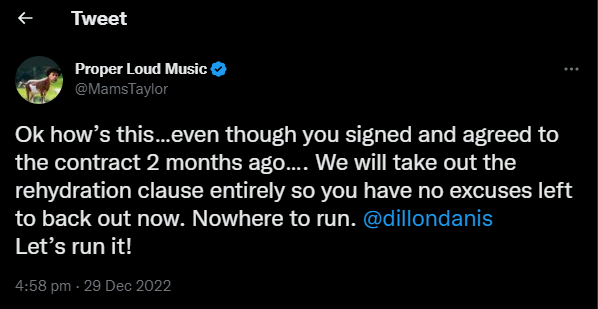