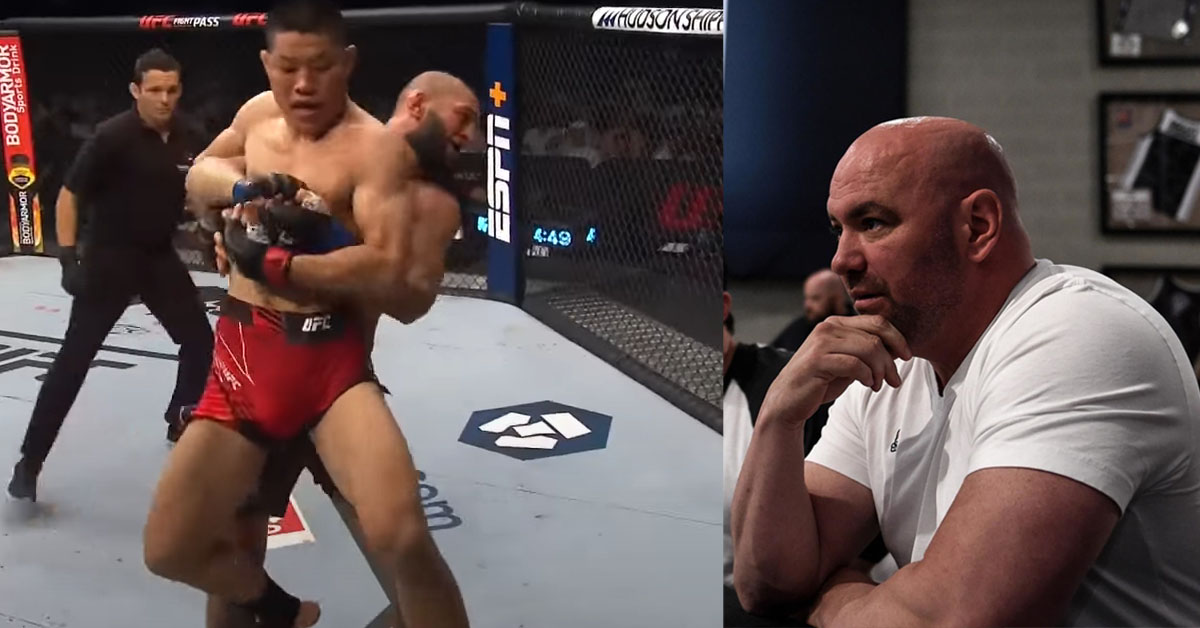 Khamzat Chimaev gave an extremely overwhelming performance at UFC 267. The Swedish Russian athlete came right out of the gate like a mad man. He immediately started working on a takedown. While Jingliang defended the first – he wasn’t as successful with the second takdown attempt. At this point Chimaev lifted him up in the air and carried him over to the part of the cage that was closest to UFC president Dana White. As he got to work on Jingliang’s dismantling Chimaev started yelling like crazy at White.

And with the audience there in Abu Dhabi – the mic didn’t pick it up. So Dana White had to illuminate us at the post fight press conference.

“He was yelling crazy sh*t at me the whole fight,” White said at the UFC 267 post-fight press conference. “I don’t know why but basically just saying ‘I’m going to fight everybody, I’ll fight Brock Lesnar, I don’t care who it is.’ He was just yelling stuff like that.”

“Listen, last time we were here, we knew this guy was special,” White said about Chimaev. “This COVID thing is one of the weirdest things any of us have ever seen. You get some people that fit the profile to be high risk and it doesn’t even feel like a bad cold to them and then a guy who’s in phenomenal shape like this guy, gets hit as hard as he did by COVID. But he’s back and he’s no doubt this kid’s special.”

“Of course you’re with me (to Cormier). We’ll kill everyone else, I’ll stay here. It’s my home. ”

He then went on to exclaim Allahu akhbar and offered a huge “Woo” .

Chimaev also shared what he’d said to Dana during the fight:

“I said I’m the king here. I will stay long time. I’m gonna come for everybody, I kill everybody. You believe me now?”

Chimaev continued: ” I told you I’m gonna kill me, that I did. He sleep bro. ”

After reviewing the instant replay Chimaev actually clarified why he resorted to such a risky move. According to Chimaev – White was reaching for his phone and wasn’t really fully paying attention to the fight.

“I want to talk to Dana White. He was reaching in the fire, I don’t know, phone or something. Brother, Don’t Miss My Fights. Don’t Look like the phone and it will happen all the time, something.”