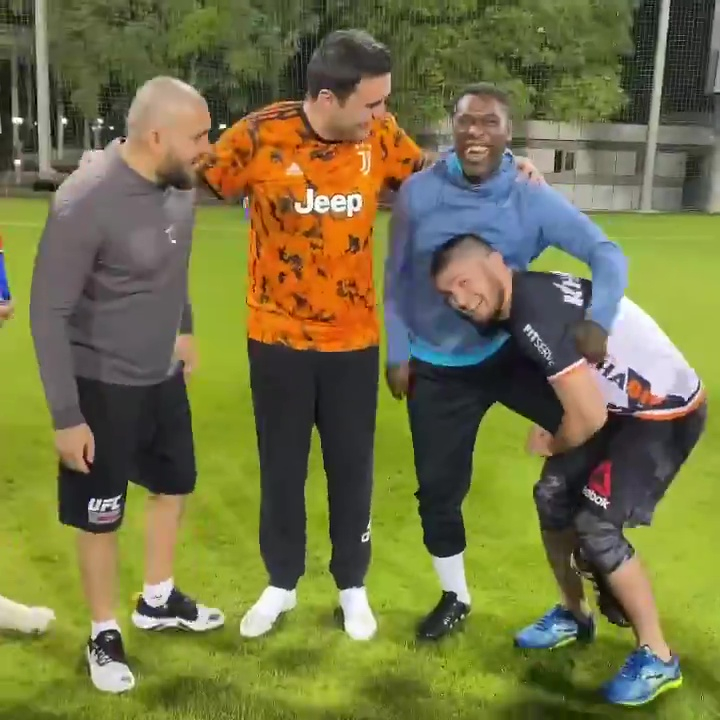 Khabib Nurmagomedov appears to have signed a contract with a soccer club FC Legion Dynamo. The Dagestani ace permanently retired from MMA earlier this year but it was speculated he would still be heavily involved with the sport of MMA – he had been coaching fighters and had even bought an MMA promotion Eagle FC outright.

However Nurmagomedov seems to have turned a page, free of the expectations of his father he is letting himself indulge in a childhood fantasy of being a soccer player – football as they call it in Russia. Nurmagomedov is 32 years old with a fighting record of 29-0. When he retired, one of his main reasons was that his mother did not want to see him in harm’s way. Unlike American football, soccer is significantly less volatile although it’s unclear how far Nurmagomedov can go considering how much hard training and injuries he’s accumulated to date. He is rumored to have had significant back and knee surgeries in the past. To many, a time when he wasn’t a UFC champion seems like it was too far back but what many don’t realize is that Nurmagomedov only secured the title in the ill fitting match up against Al Iaquinta – a late day replacement in 2018.

Be that as it may, Nurmagomedov is currently prepping for his soccer debut.

In many ways this reminds of the case of Michael Jordan retiring from basketball to pursue baseball. Of course we all know, he ultimately ended up returning to basketball several years later but his form was never the same. One can only hope this won’t be the case with Khabib Nurmagomedov.

Earlier this month Dana White had expressed he’s put the Khabib negotiations chapter behind him and that he felt that Nurmagomedov was firm in his resolve – so firm he couldn’t even be swayed by the idea of fighting Georges St-Pierre. And really, with St Pierre riding 40, Khabib and his legacy seem firmly cemented.  That is until Charles Do Bronx wins the title, non?