Lee, who is currently formally still a part of in Khabib Nurmagomedov’s Eagle FC was released from the UFC in November 2021.

Recently, a video surfaced of Dana White continuously slapping his wife after she slapped him.

The video seemingly took place in a club on New Year’s Eve. Dana has received intense backlash from MMA fans and mainstream media alike, adding to his belt of controversies.

Kevin Lee, although expelled from the UFC posted a tweet in his defense. The former UFC athlete replied to a tweet by Stephie Haynes where she said:

“By your logic, a toddler that walks up & hits you is deserving of a beatdown. Critical thinking is lost. She’s tiny & he’s enormous. He didn’t need to hit her. He didn’t need to instigate the situation by grabbing her hand & dragging her. She posed zero threat to his safety.”

The athlete replied to this by saying: “But you wouldn’t just let a toddler hit you and there was no repercussion right” 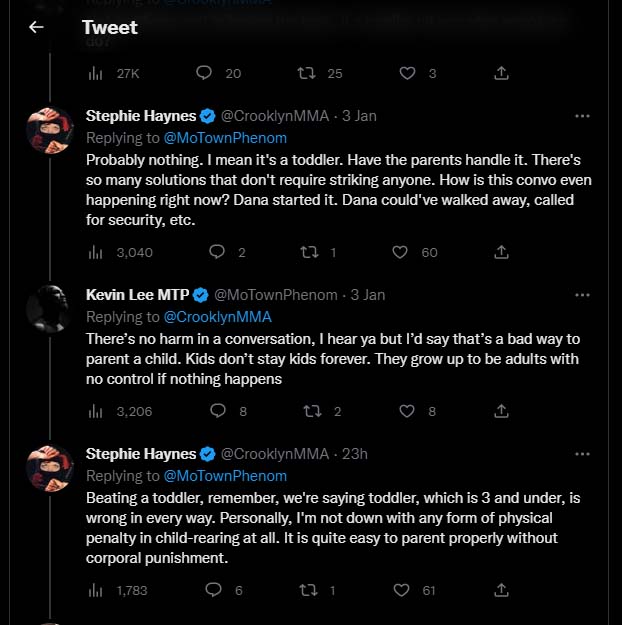 Haynes countered his statement by saying:
“No, I wouldn’t, but if I didn’t know it was coming and it happened, I wouldn’t beat the toddler. Dana grabbed her hand and was trying to move her around by it. He also followed her into the back area and was still swinging. Zero justification.”

Lee responded by distorting her logic and saying:
“Not justifying, just following the logic. If a toddler hit you what would you do?”

Following this, Lee has also gotten a lot of criticism. The “Motown Phenom” is being accused of trying to get on White’s good side in hopes of a new contract with the UFC.

Along with his knee complications, Lee has also had managerial problems.
Lee believes that he got cut from UFC because he shared the same manager as Francis Ngannou.

Ngannou has had a troubled relationship with the company. According to Lee, the bad blood between the CAA and the UFC due to the heavyweight led to his exit.

Lee has since joined up with Dominance MMA and controversial manager Ali Abdelaziz adding fuel to the fire that Eagle FC is dead in the water due to Russians being sanctioned. Abdelaziz has long had ties with the WSOF (which has since been rebranded to PFL) and is one of the leading MMA promotions in terms of athlete compensation.