The dramatic fifth-round knockout of Kamaru Usman by Leon Edwards in the UFC 278 main event has left the whole world in a frenzy. With less than a minute left, a visibly discouraged Leon Edwards connected with a picture-perfect head kick to knock Usman to the ground. The moment sent the Salt Lake City audience into an incredible frenzy.

Kamaru Usman was the Welterweight champion for quite a while but despite losing his title he’s taking it in stride. After all, he’s most likely to receive an immediate title shot against Leon Edwards.

Pretty much as soon as he was medically cleared Usman called Dana White and expressed his interest into running it back.

But Usman deserves even more credit – turns out he’s perfectly capable of laughing at himself. Former welterweight champion of the UFC recently shared a funny clip of a headkick defense from the notorious Dale Brown of Detroit Urban Survival Training.

Detroit Urban Survival Training went viral in 2021 after a series of eyebrow raising self defense techniques were receiving millions of views online thanks to the pandemic effectively benching everyone.

Brown used the momentum and became a world wide celebrity even poking fun at himself. He went on to corner Joaquin Buckley in the UFC.

‘Damn. Why didn’t anyone tell me earlier? LMFAO’ 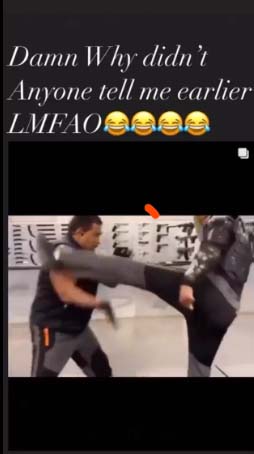