Justin Gaethje is definitely one of the most exciting athletes to ever compete in MMA.

Gaethje is known for his incredible knockout power. On top of that, his heart and willingness to exchange put him in some of the best MMA contests of the past decade. In fact, Gaethje is such an exciting athlete that he has earned a performance bonus for every single one of his UFC wins.

Perhaps his fortitude comes from his upbringing. Gaethje was born on November 14, 1988, alongside his twin brother Marcus John Gaethje.

Justin lived in the city of Safford, Arizona. His father, John Ray Gaethje worked as a copper miner. UFC star comes from a lineage of copper miners, both his father and grandfather worked in the Morenci mines until their retirement.

Justin began his combat career in Wrestling, at just 4 years old. He became a four-time finalist and two-time state champion during his time as a high school wrestler.

Gaethje’s first contact with MMA came when he was still a freshman in college. At the time, several MMA stars like Georges St-Pierre, Clay Guida, and Donald Cerrone would go and sharpen their wrestling skills in Gaethje’s University wrestling program.

After picking up an interest in the sport, Gaethje would transition to MMA and make his amateur debut in August of 2008. He won his first bout via a devastating slam Knockout.

Despite going 7-0 as an amateur, Gaethje would only turn pro after college. He made his professional MMA debut against Kevin Croom, winning the bout by first-round knockout.

With seven straight victories, Gaethje would then leave the regional MMA scene. In March of 2023, Justin faced Gesias Cavalcante in WSOF 2. He would once again win the bout via first-round stoppage.

After each contest, Gaethje, who came into the sport as a pure wrestler, would become more and more willing to trade strikes with their opponents. In fact, Gaethje had such an aptitude for striking that he KO’d 15 out of his first 18 opponents.

After an undefeated championship reign at WSOF, Geathje was already regarded as one of the best lightweights in the world.

In July of 2017, Justin would finally move to the biggest organization in the world to test his skills. He made his UFC debut against Michael Johnson in a contest that quickly became one of the most talked about. Either athlete had a chance to knock out the other one, but Gaethje was able to get the better of Johnson and finished him with strikes in the second round.

Despite being on an all-time high after his UFC debut, Gaethje would know defeat for the first time in his MMA career in his next appearance.

In another back and forth war, Justin was not able to endure Eddie Alvarez’s punishment and lost the bout via KO after eating a devastating knee to the head.

Following another knockout loss to Dustin Poirier, fans were wondering if Gaethje would ever become a UFC champion. Despite being a highly skilled athlete, Gaethje absorbed a lot of significant strikes. The common thought was that he lacked the defensive ability to really climb to the top of the division.

However, Gaethje would prove doubters wrong. After coming back with a  victory over James Vick, Gaethje won 3 in a row, all by stoppage.

After Khabib pulled out of a title bout against Tony Ferguson, Gaethje stepped up as a replacement to face Ferguson in a 5-round interim title bout.

In that contest, Gethje appeared to have significantly improved his defensive skills. Despite being a massive underdog, Gaethje completely outclassed Ferguson.

His footwork and smart use of a defensive jab showed the world that his work alongside his coach Trevor Whittman made him a significantly better striker.

After winning the interim belt, Gaethje challenged Khabib Nurmagomedov for the undisputed title. However, Nurmagomedov’s grappling was too much for the American, and Khabib ended up winning the bout via triangle choke.

Since then, Gaethje has once again bounced back. He defeated Michael Chandler by unanimous decision in UFC 268 and is scheduled challenge Charles Oliveira for the UFC title.

He will be facing the Lightweight champion, Charles Oliveira, in the main event of UFC 274 on May 7.

Justin Gaethje is the #2 rank contender in the UFC’s Lightweight division. Also known as, “The Highlight”, he is one of the heaviest hitters and the most violent fighter in his division.

After making a crazy start, Justin (22-3-0) was looking doubtful for a future in the UFC. However, Justin did very well to turn things around and even became the interim champion for some time. Currently, Gaethje is one of the most entertaining and explosive fighters on the roster.

Known for his fearless striking and commendable endurance, Gaethje is sure to have made good money from his fights. Thus, the only question in people’s minds will be: How much did he earn? Well, let’s examine what are Justin Gaethje career earnings through salary, purse, payouts, bonuses, incentive pay, sponsorship & what his net worth is. 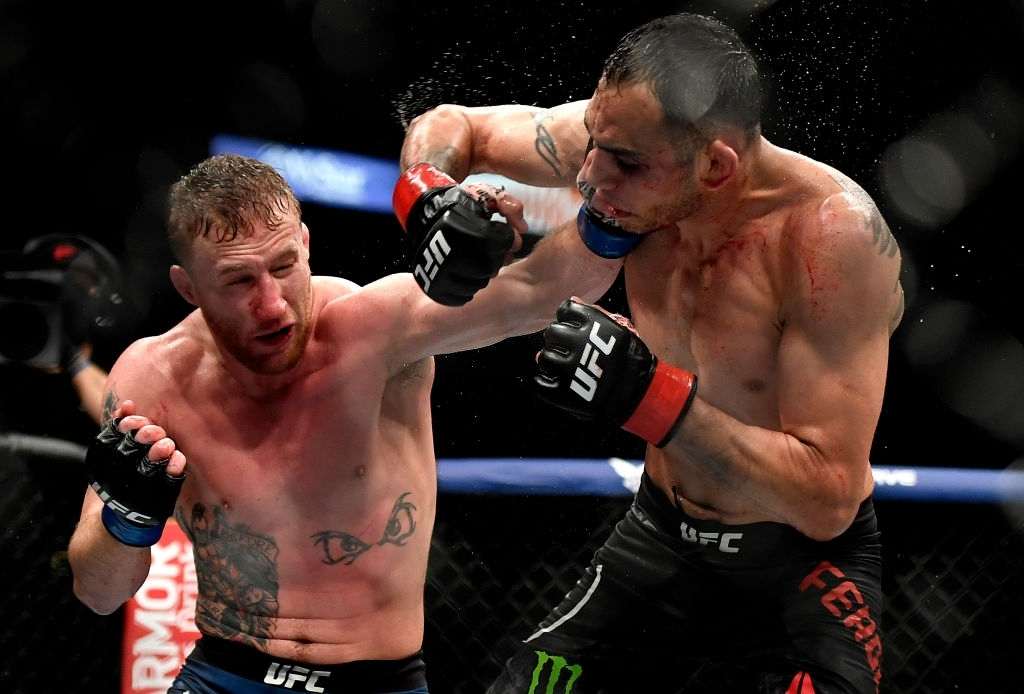 Before we begin, here are some important things to keep in mind. Firstly, Nevada State Athletic Commission does not release fighter pay, so none of the following payout data for the event is official. However, we can estimate a fighter’s pay info by looking at their previous, officially-released salaries.

Secondly, Justin’s salary, incentive pay, and PPV revenue from his upcoming fight with Michael Chandler are yet to be released. Hence, you can check back here for updates. With all that out of the way, let’s begin.