Jon Jones was universally mocked once it was revealed that the former UFC champion had been arrested for domestic violence. Jones’ arrest reverberated through the MMA community with many high profile athletes slamming Jones. Among those that piled on Jones for his actions in Las Vegas were notably Israel Adesanya, Dan Hooker and others.

Jones has since squared away his legal issues thanks to his now-former fiancé not wanting to press charges against him. Jones accepted a plea deal back in December of 2021.

Jones originally was charged with felony tampering with a vehicle and misdemeanor domestic battery. The domestic battery charge was dropped, and Jones pleaded nolo contendere to destroying the property of another. Nolo contendere is a plea where a defendant accepts a conviction, but does not admit guilt.

Jones subsequently posted a video kissing the fiance but revealed 3 months later she had left him for good.

Sonnen, on the other hand, found himself in hot water when he was given 5 citations for a Las Vegas incident. Initially the charges were dismissed and Sonnen thought he was in the clear.

But the state soon refiled and extended the list of charges to 11.

But the real story didn’t emerge until Youtuber Brendan Schaub tried to exhonerate Sonnen with his retelling of the events. This prompted the victims of the incident to release details include them being witnesses to Sonnen allegedly open palm striking his wife.

“Man everyone and their mom covered my story when I was an asshole in Las Vegas, Sonnen allegedly attacks his wife, another woman along with like five men and crickets”

Man everyone and their mom covered my story when I was an asshole in Las Vegas, Sonnen allegedly attacks his wife, another woman along with like five men and crickets ??‍♂️

Jones also made other tweets on the topic:
“Defending honor? ?”

This is in direct reference to Brendan Schaub commenting that Sonnen was defending his wife during the altercation.

Jones also directed one of his reactions at Dan Hooker:
“@danthehangman Brendan S. Is this what you guys are jumping down my throat about?” 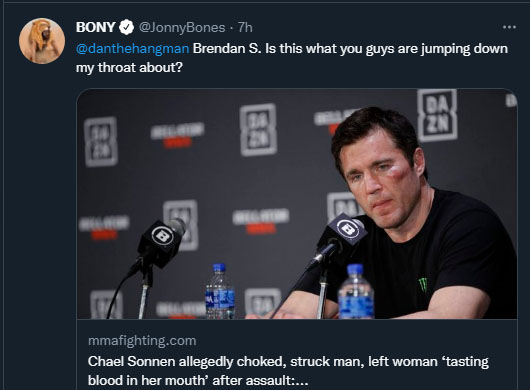 And Jones might actually have a point. Sonnen’s legal issues haven’t been covered extensively. Las Vegas Review Journal and MMA Fighting were the only MMA outlets besides ours to widely publicize the alleged details of the Sonnen incident.

In the fall out from the new charges, Sonnen has been suspended from MMA analyst duties from ESPN.