Johnson is a mainstay on the list of most followed people on Instagram in addition to topping the highest paid actors list. Still Rogan had a highly unorthodox proposal for how Johnson could make some extra money.

Speaking on The Joe Rogan Experience, he said: “Cryogenically frozen The Rock’s [sperm] that’s worth a million dollars.” If you say so, mate.

“So in my mind, it is 100 percent a million dollars at least, we are being conservative here.”

“If The Rock can jerk off twice a day, he makes $2 million a day minimum.”

Rogan is a seasoned comedian having headlined entire comedy tours. Previously Rogan came under fire after featuring some Covid 19 conspiracy loving doctors on his podcast. For this controversy he apologized and promised to feature more scientific counter points. This was a move welcomed by Dwayne the Rock Johnson. 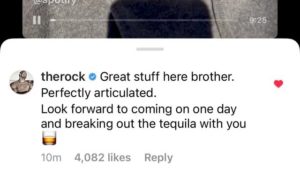 However Johnson pulled his support once he was tagged by a political guerilla activist in a compilation of Rogan using a racial slur. At this point Johnson’s issued the following statement: Johnson has long ties to UFC’s parent company Endeavor (previously called William Morris Endeavor). He’s also recently signed a deal with the UFC to be the official shoe provider along with Under Armour.