If you’re a young fighter struggling to secure a sponsor the market just got even smaller. Not only can’t you customize your own fight kit – you’ll also be forced to wear UFC provided shoes once again. Previously UFC was partnering for the kits with Reebok – so shoes aka sneakers were off the table. However it looks like the Venum era will be no different.

Perhaps Francis Ngannou’s true brilliance is to come out looking sharp and wearing as little of UFC promo materials as possible. 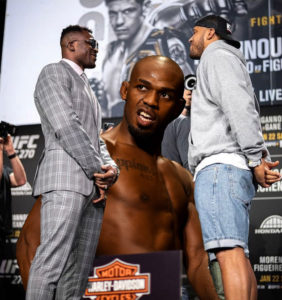 This isn’t the first time The Rock tried to partner with the UFC. The Rock previously was a part of that whole BMF belt charade in an attempt to hype up the crowd for a Mark Kerr Biopic based on his (great) documentary THe Smashing Machine.

The biopic is still in development however it’s looking like it won’t materialize. Dwayne ‘The Rock’ Johnson is a longtime part of Ari Emanuel’s stable of clients – and has been with WME (later renamed to just E aka Endeavor) for a number of years.

The odd part about UFC partnering with THe Rock x Under Armour is that no actual model was announced – just the partnership.

HISTORIC.
I’m honored & proud, my @ProjectRock is the OFFICIAL GLOBAL FOOTWEAR PARTNER of the @UFC ?
Starting this weekend at #UFC270 NGANNOU vs GANE, all athletes & teams will rep @ProjectRock footwear.
Engineered for the HARDEST WORKERS IN THE ROOM who WALK THE WALK.
~ dj ?? pic.twitter.com/TInm2iwEz4

He was the first to break the news.

I guess The Rock’s Under Armor line is going to be the shoe provider for UFC kits. https://t.co/ndqdUO05Fl