Jack Hermansson defeated Chris Curtis by unanimous decision on Saturday in the co-main event of UFC London. He maneuvered around Curtis and finished him off with kicks and long-range punches.

Curtis was most displeased with Hemansson’s style and had given him the finger during the bout.

Hermansson, ever the gentleman, apologized to the audience for the decision win and explained he was preparing to face Darren Till who had to pull out due to injury and had drawn a blank as to how to solve the Curtis puzzle.

Hermansson and Curtis got into a little argument in the cage’s middle after the final horn sounded, trading insults as Curtis flipped Hermansson off. Hermansson claimed in his cage interview that the adrenaline of the moment overcame him and caused him to say something.

Chris Curtis flips off Jack Hermansson on his way out of the octagon. #UFCLondon pic.twitter.com/LY9PbkE7NK

Later, while with reporters backstage, Hermansson apologized for the event and said he hoped to have the opportunity to talk with Curtis about it soon.

“I can’t remember [what was said] but he was, like, taunting me, then something slipped from my tongue. I’m a little bit disappointed with myself that I got caught up in that because I’m all about sportsmanship.”

“I want the sport to be clean and after a fight we should be good friends. So I really apologize to Chris Curtis for that…I haven’t [spoken to him yet], unfortunately. I would love to square up and again, I apologize so much for my bad behavior.”

While Hermansson may have started it, Curtis later acknowledged that he also contributed and wanted to put the past behind them. 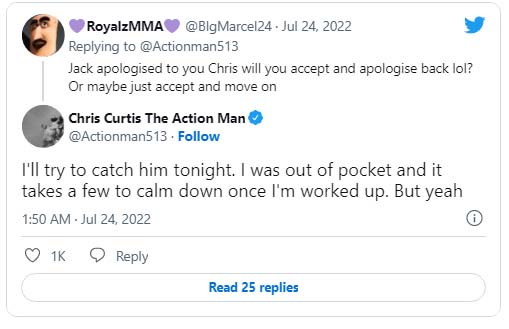 Hermansson’s victory maintains him in the running for the middleweight championship. This was his first victory since losing a split decision to Curtis’ partner Sean Strickland earlier this year.

He plans to make a comeback in November when the UFC is supposed to return to Sweden.

Hermansson added he still looks forward to facing Till:

“I think Darren is a great opponent. He has a lot of fans. He’s a fan favorite, but it’s a little bit scary to book up against him a third time. But third time’s the charm, so maybe.”