While UFC lightweight champion Charles Oliveira has to deal with the implications of missing weight by half a pound, Islam Makhachev ready to pile onto his misery.

Many in the community are critical of Oliveira – as if this wasn’t tied to an issue others also experienced. Roughly 20 athletes missed weight prior to UFC 274 due to the scale being miss-calibrated yesterday during the day.

Makhachev labeled the scenario ‘Big Drama.’ He then wrote:

“Anyway, keep your head up Charles and good luck tomorrow, we all know you’re champ for a reason. “

Oliveira was given one hour by the Arizona commission to shed the half-pound after the initial miss.

If Oliveira is victorious tonight he must then compete for the vacant belt.

In the history of the UFC, no champion has ever missed weight for a championship bout. Therefore, saying  the UFC 274 weigh-ins were dramatic would be an understatement.

Other UFC competitors expressed their amazement and dismay when Oliveira failed to make weight again, and word spread that he would be stripped.

This is in stark contrast to another UFC title bout in the lightweight division. Not many remember this, but Khabib Nurmagomedov actually won the UFC lightweight title for the first time in a bout with Al Iaquinta – who had missed weight. UFC’s attitude about it seemed very different then so we can’t help but wonder if this is some kind of bias against Charles Oliveira. 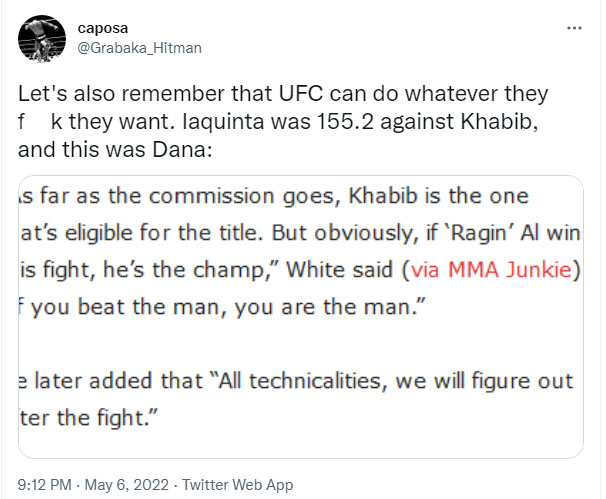 As the tale progresses, there are still many unanswered questions. It is unknown why Oliveira’s squad opted to come up at the weigh-ins with just five minutes to go.