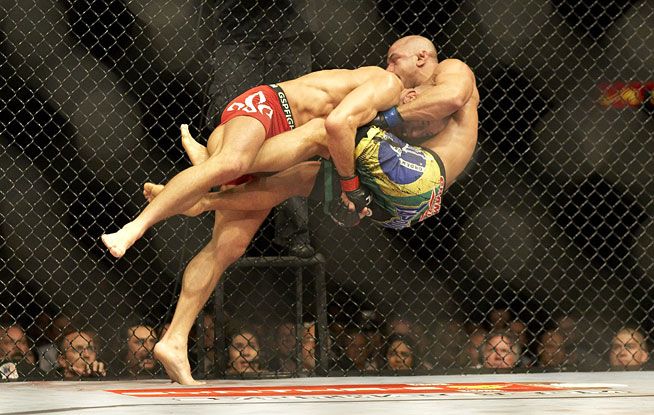 Georges Saint Pierre is hailed as one of the greatest fighters in MMA history. He was such a skilled fighter that he could adapt on the go. He has a black belt in Kyokushin Karate, Brazilian Jiu-Jitsu, Shidokan, and Gaidojutsu.

GSP is a former welterweight and middleweight champion. During his tenure at the UFC, he accomplished victories against top-notch fighters like Matt Hughes (x2), Nick Diaz, Carlos Condit, Matt Serra, Josh Koscheck, B.J. Penn and others. He’s fought only once in the middleweight division – for the title. After a long layoff, he returned to the cage and fought Michael Bisping.

The Canadian was inducted into the Hall of Fame of UFC in September 2021 for his remarkable achievements in MMA. He has been on top of the P2P rankings throughout his career and was a treat to watch.

His title defense against Thiago Alves was a particularly interesting showcase.  A great example to prove that psychological component should not be disregarded. GSP was tired and was taking a beating by Alves in front of the huge crowd at UFC 100. Alves was one of the hardest hitters in the welterweight division. St Pierre pulled his groin in the process of defending.

Between the rounds, GSP told his coach Greg Jackson about his injury. Greg replied in a furious manner pumping up GSP:

”I don’t care. I don’t care Georges. This is where champions are made. You understand me? Nothing matters now. Hit him with your groin. You got my mentality?”

GSP went on and won the fight via unanimous decision. Despite the injury, he completed takedowns and utilized top control. During the post-fight press conference, GSP revealed that he could hear his abductor muscle snap.