Nick Diaz returned to the UFC octagon after a 6 year lay off at UFC 266 to fight Robbie Lawler. Ahead of the fight many were concerned for Diaz because he was looking out of shape and wasn’t really all there mentally back in 2019 when he did a huge interview with Helwani.

Diaz was spotted looking in tremendous shape in April.

However fight week promotional stills would go on to blow everyone’s minds with Diaz sporting the dad bod.

Now Ariel Helwani is sharing behind the scenes details about Nick Diaz changing management teams.  Helwani explained on his podcast with the Ringer that Cesar Gracie is likely to be the main culprit for that strange final performance of Diaz we witnessed last year.

The conversation started with a guest asking Helwani about Cesar Gracie standing up Helwani in recent history and what that was about.

“Okay, so this is a story. Last couple of years, Nick teamed up with this guy named Kevin MuBenga who has no ties to anyone in the fight game, but they somehow met each other. ”

Helwani went on to reveal infamous 2019 interview with Diaz was arranged by AJ Agazarm at UFC 244 Masvidal vs Diaz.

“So, UFC 244, Masvidal Diaz, Diaz loses. I then start talking with AJ Agazarm, who’s with Nick, about doing an interview with Nick. Nick wants to speak. He wants to break his silence at this point. He hadn’t done an interview in five years, right?”

Helwani explained how he then met Diaz, his new manager Kevin Mubenga and Agazarm and arranged for the interview. Mubenga kept in touch with Helwani afterwards. Fast forward to 2020.

“And pretty much dropped Kevin and everything. And – we saw – now I don’t know if he’s to blame, this that you saw the shape that Nick was in. And there’s a lot of hard feelings about that because those guys felt like they had a Nick on the path. And then something happened and this old figure comes back and you know takes them away and you see how the fight ended up.”

“So there’s something there. There’s something that happened. And it was just kind of fascinating to me that this old figure from his past, who by the way, if you go to that story that I wrote in first person after he was suspended for five years, about you know his past that he gave me this incredible story…”

Helwani goes on to explain he had previously had massive scoop from Diaz years ago when he gave an interview and  opened up about his girlfriend dying – and in process revealed he believed Cesar Gracie was shady with how he managed his career.

“He references Caesar as like this crooked jujitsu coach who acted as my manager and all this stuff. And Caesar got mad about that. And Nick then called me the next day and asked me to retract it, and I didn’t and it was a whole mess of a situation. So basically, there’s obviously a lot there. And you notice that Cesar and Nate aren’t exactly like, two peas in a pod these days. Nate’s doing very well for himself. And it was, it was I think, upsetting to the people who thought that they were getting Nick back on the right track that he came back and took them away. That’s very sad, isn’t it? “

Here’s what Diaz previously shared bout Cesar during that interview with Helwani:

“Guys like Conor, who are gonna make more money than me can see how to do it, as well as negotiate what they want in their contract using a team and agency and lawyers instead of their crooked jiu-jitsu trainer and coach, who was my manager for the majority of my career except for my last fight when I found the right agency on my own and signed with them, and I didn’t even graduate the motherfucking eighth grade.”

This is Nick Diaz earlier today. He weighs in the 175-165 pound range, per his manager Kevin Mubenga.
He just completed a 14-week diet and training regimen. This is the first time he cuts weight in approximately four years, Mubenga said. Diaz wanted to do a test cut because … pic.twitter.com/5A8EvyLeUn

… he is keeping a close eye on the big welterweight fights coming up. He is “100%” planning on fighting again, per Mubenga, and is targeting an early 2021 return. (? @elfrogito)

Another MMA media member – Caposa aka Grabaka hitman pointed out how another member of Diaz camp publicly unloaded on Cesar.

“My guy Nick Diaz was overtrained, stressed, exploited, and displaced. Nick Diaz was not properly handled and taken care of. I told his girlfriend that many of us, including me, will not be around Nick because of Cesar’s conduct and violence toward the people that want to help Diaz.”

“”Nick was better off if he was allowed and encouraged to stay in Stockton with his training camp (and) with his brother instead of Cesar academy. Cesar had Nick doing appearances and seminars so he can get the most buck out of Nick’s comeback fight #UFC266. This upsets me and many other people in our circle.” 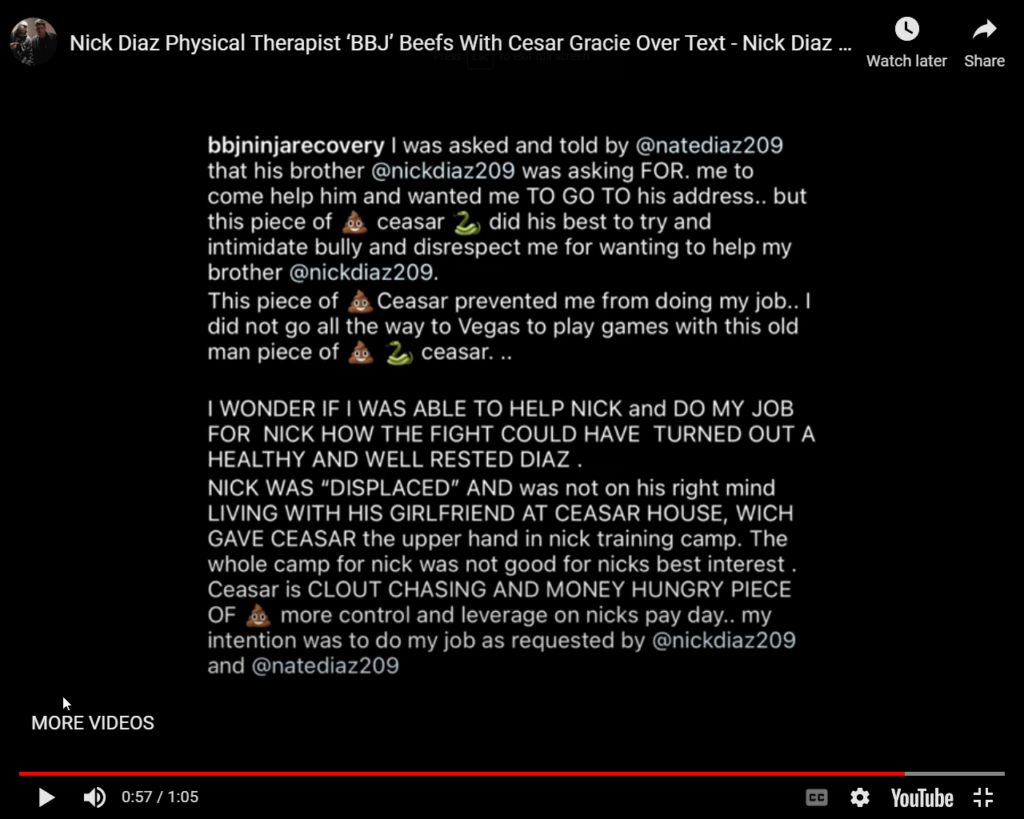 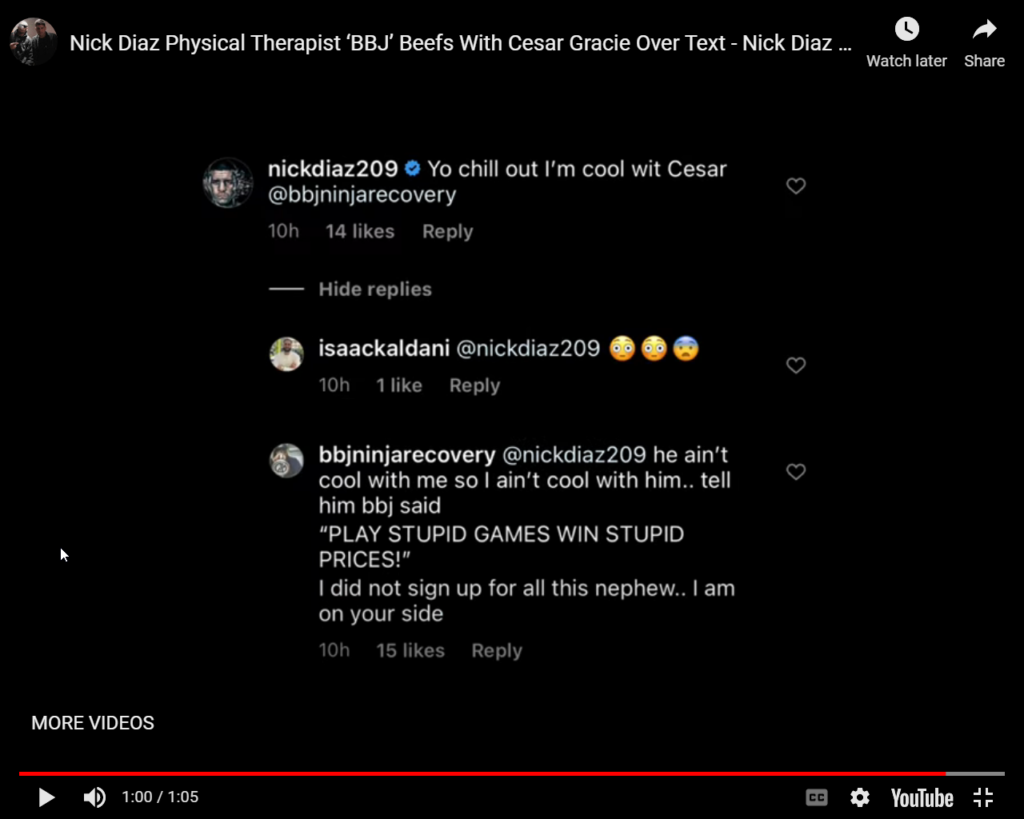 If this is true – it’s tragic. Having a legend exploited by his management is a scenario nobody wants to see happen.

As we speak it’s likely Diaz is still in Cesar’s camp – earlier this month he shared a picture of himself with Ralph Gracie. Cesar Gracie is the offspring of Sonja Gracie-Gronning and is a distant cousin of Ralph’s.