Gordon Ryan spent the better part of the last 2 years inactive – and under the contract with ONE FC – therefor unable to compete in competitions streamed by UFC.

Initially he was booked to return against UFC and BJJ veteran Vinny Magalhaes but that was scrapped early yesterday when it was announced ADCC medalist Nick Rodriguez would be stepping up to compete in the main event after Magalhaes suffered ‘medical issues’.

Both Ryan and Rodriguez weighed in at over 200lbs. Besides them, the event featured the mismatched co-main event between ADCC & IBJJF World champion Bia Mesquita and former UFC bantamweight champion Miesha Tate. Elsewhere on the card, there was an 8 men tournament competing for the $25,000 prize.

To the surprise of many, Tate held on for dear life and managed to get Mesquita into overtime. In the overtime, Mesquita secured a win by armbar.

What a match! Bia gets it done!

In the main event, Nick Rodriguez put in a valiant effort and got closer to Ryan than many have gotten – a far cry from their uneven match at this year’s ADCC.

He even slapped on a toe hold that ended up breaking Ryan’s ankle.

Rodriguez lost to Ryan back in September by a quick heel hook. This time however, Ryan seem more evenly matched by Rodriguez.

So close for Nicky Rod!!! But we are going to escape time!! #FPI3 pic.twitter.com/3ObYx8OmBu

Elsewhere in the tournament, ADCC veteran Mason Fowler got several interesting wins via submission including one against Patrick Gaudio.

Mason Fowler is headed to the finals! Via triangle! #FPI3 pic.twitter.com/eZVIJo9gGy

Gaudio has been actively vying for a chance to face Ryan – but it looks like he might have to wait a while longer.

Fowler ended up winning the Absolute tournament. After the fact he released a statement on social media saying:

“Christmas came early this year! I am the new @ufcfightpass Absolute GP Champion. Thanks so much to Professor Caio, all of my training partners that helped me prepare, and all of my sponsors for the continued support. Looking forward to making big things happen in 2023.”

Ryan poked fun at Gaudio after the event posting: 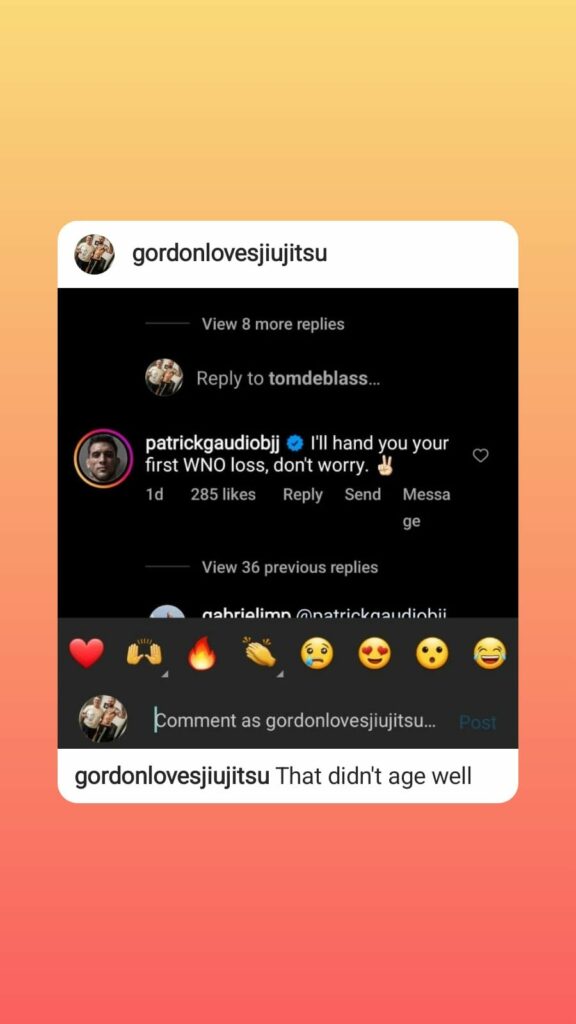 The event highlighted the flaws of the Eddie Bravo invitational ruleset in many ways but the most explosive accusation came after the fact.

Gordon Ryan was answering press queries after the event and flat out accused Rodriguez of using lotion to induce slipperiness and increase his odds of survival.

“And yesterday I asked in the rules meeting like, what are the like what are the repercussions for greasing. And they said, you can’t grease. I’m like, okay, what happens if someone gets caught greasing like nothing?” Gordon told calfkicker.com

“I’m like, Oh, so you can grease. So the second that the sweat started hitting his wrist and I’ve trained with him many times and he’s is often very slippery and I was trying to get a hold of him.”

“Because it was so slippery. And while I was doing that, he, like, put on a toehold. And I was like, I’ll be fine. And then, like, he just ripped it as hard as he could, and my leg broke, and I was like, Oh, well, I guess that’s broke. My may as well just let it go. And then he used that opportunity to pull the leg out.”

“As I was trying to go for a heel hook, I switched the Achilles and the leg was just to slippery it slip right out. And then I was like, Welp, I just didn’t hold on to his leg. Got by only like broken. And now we’re back in neutral as it’s perfect, but luckily it’s nothing I didn’t see on crutches or a brave enough and you’re good and now it’s fine.”

Ryan went on to reveal:

“I’ve had this ankle pop so many times that like, basically it’s hanging off my leg. So, yeah, it’ll be fine in few days.”