Gilbert Burns just found a creative way to bypass UFC’s flag ban. So much so that the company even tweeted about how cool the UFC welterweight looked.

As we all know, the UFC banned the displays of all types of regional flags from their athletes. The promotion did this because of the large number of Russians they have competing after Aljamain Sterling’s team posed with a flag of Ukraine ahead of his clash with Petr Yan.

Early on, there were several attempts to circumvent the policy but the UFC brass wasn’t pleased and soon hefty fines were on the table.

But after an incident in which Li Jingliang pointed to a flag in the crowd and got it. Followed by a UFC official snatching it away the UFC is taking a harsher stance on the policy.

Several other athletes also revealed that the promotion warned them not to bring out their flags.

One of them is featherweight contender Sodiq Yusuff. The 29-year-old revealed that the UFC threatened to fine him if he insisted on carrying the Nigeria flag.

“The flag thing, it was so weird,” Yusuff explained on a podcast episode.

“They always let me wear my bandana, but that weekend, they told me, they said, ‘Hey, if you wear the flag, we’re gonna fine you a lot of money.’ So it wasn’t worth it. They were like, ‘You can’t wear it anywhere the UFC cameras are gonna catch.’”

Burns, who’s a Brazilian patriot, is known for carrying his country’s flag during his entrance walk. He’s also known for wearing a flag bandana.

To avoid getting fined, he had to get creative for his appearance at UFC 283.

The welterweight star wore a typical blue suit but with the lining having a Brazilian flag pattern.

UFC’s official social media even shared a picture of Burns showing off the flag by opening up his jacket. 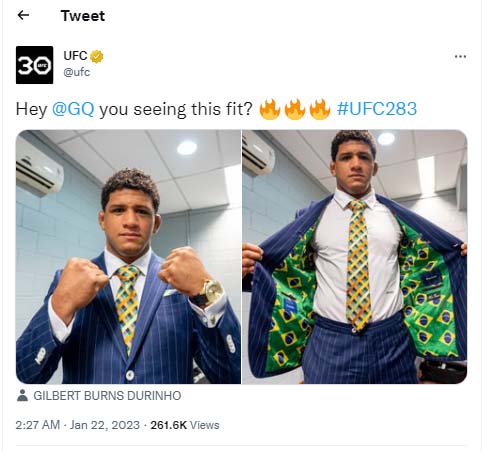 While Burns looks great, the reactions to the post were mixed. Some appreciated his drip while others pointed out that the UFC had tagged some random account instead of GQ’s official account.

Of course, the real headline is that Burns won his match at UFC 283. He submitted Neil Magny with an arm triangle in the very first round, in his home country.

🇧🇷 @GilbertDurinho showcasing his grappling once again to lock up the first-round sub! #UFC283 pic.twitter.com/0Ax8l1mXYs

Gilbert Burns taps out Neil Magny in the first round! 👋 #UFC283 pic.twitter.com/yJ7HKpx5O4

After the victory, he made his next opponent known with a spectacular callout:

“I want to be back very quickly, and I’m going to finish everybody. Colby Covington –- I’m coming for you,”

The crowd was ecstatic because their hero was calling out a Covington who had infamously referred to them as “filthy animals” during a win over hometown favorite Rafael Dos Anjos in Brazil.

Burns even wore a bandana during his post victory speech so despite all that he might not be able to dodge the fine after all.