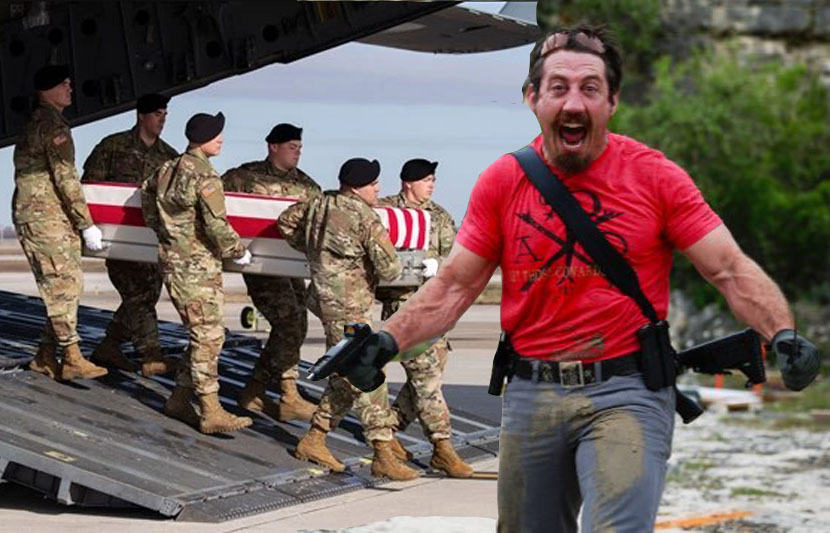 Tim Kennedy is a military veteran, he’s also a former UFC fighter. Kennedy is a somewhat controversial figure because he’s done several pr stunts that are eyebrow raising, one of them being showcasing how waterboarding is not torture in his own backyard.

But Kennedy has probably outdone that stunt several days ago. It all started with a social media posting outlining that he will be going to Afghanistan  – in some capacity. 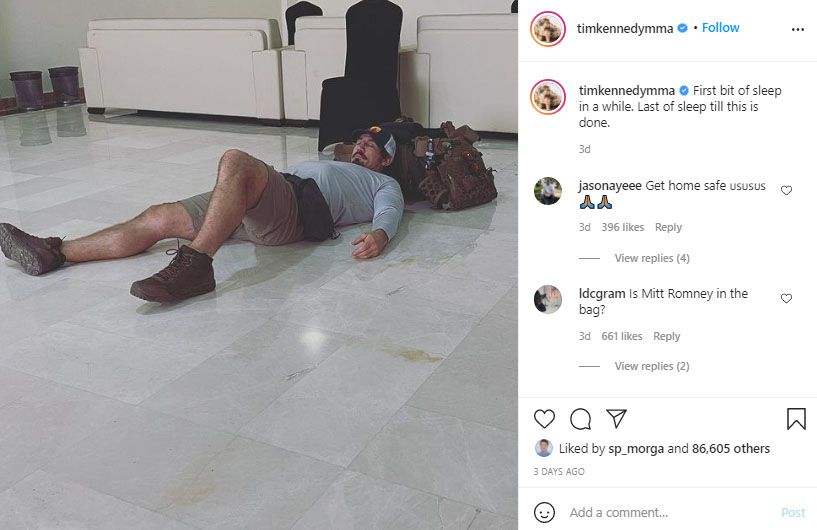 Right off the bat, Kennedy seemed a bit overdramatic sleeping on the floor – because there are quite literally sofas in the background.

And it only went south from there. Kennedy’s next post prominently featured a brand he has been an ambassador of since 2017 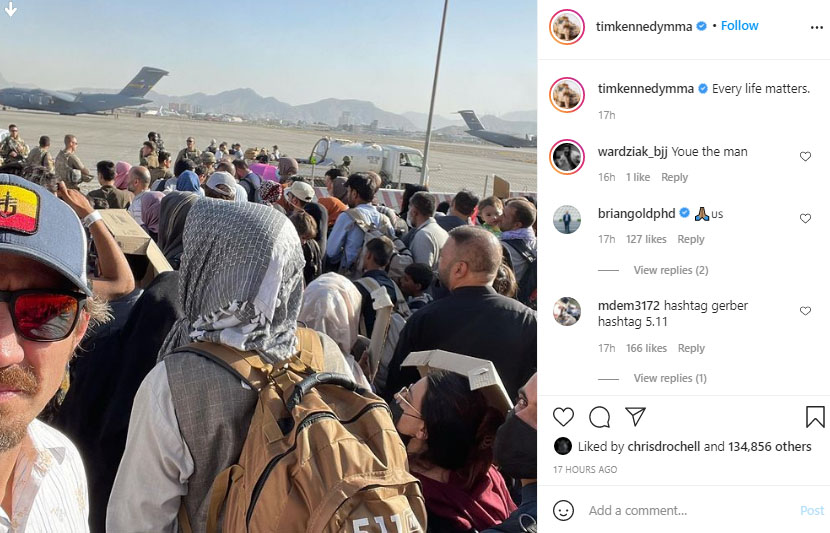 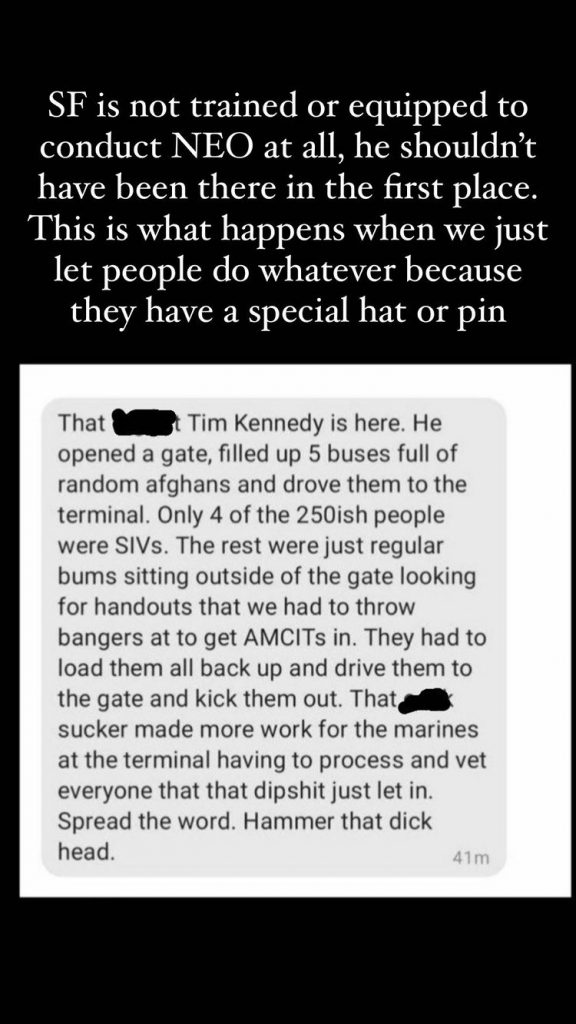 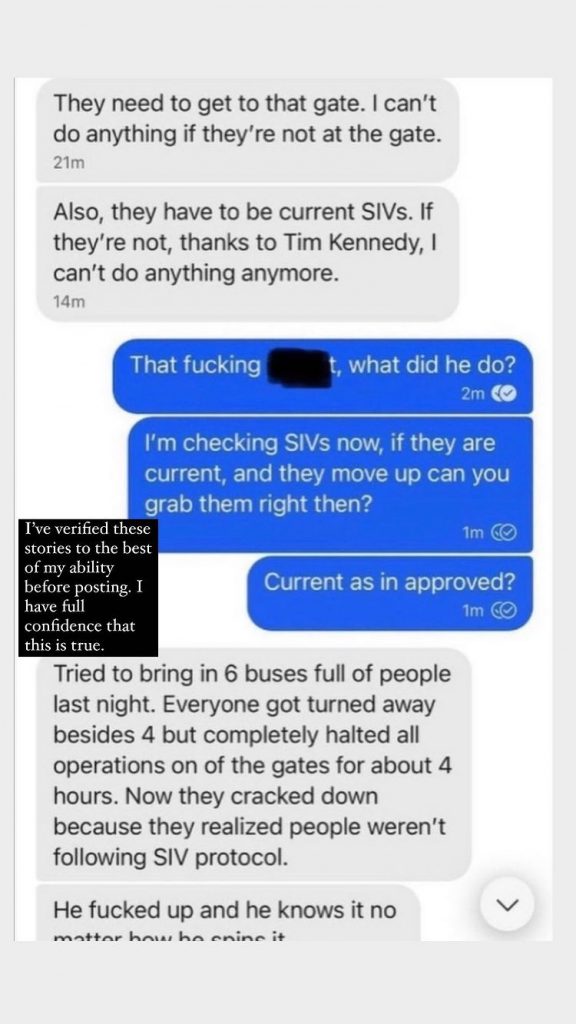 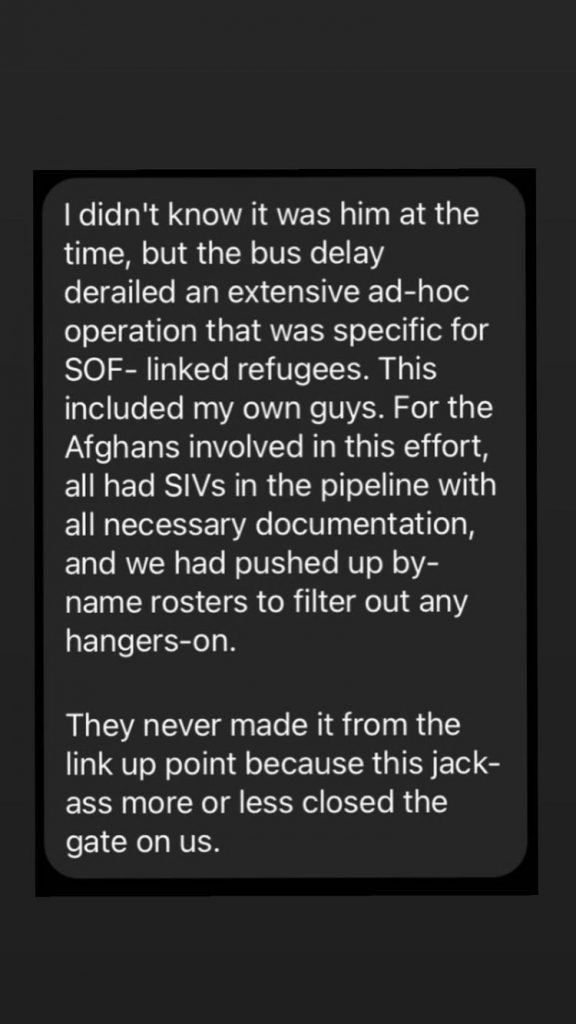 Kennedy was upset by the criticism – as he often is so he issued a rebuttal. His statement reads:

A few things, though, to follow the recent talk about my involvement in the Afghanistan evacuation:

1) I was not running around on my own. The Army doesn’t care that I have a lot of followers online. It’s their battle space. The talented group I was attached to as a volunteer was listed in the command center as a supporting element. We were part of the team. If that were not the case, I would not have been allowed to assist and support in any actions that involved going outside the wire.

2) People have referred to this team as “Tim Kennedy’s Team.” That’s completely false, and does a giant disservice to the the talented Team Leader a JPRA (joint personnel recovery agent), who has 10 years more experience than I do, as well as my incredible teammates. All of whom are extraordinarily talented. I have been in Special Forces for 17 years, and I still didn’t deserve to be with them. I was proud to be a part of it. I’m proud of our work and will continue to help in whatever capacity is asked of me.

3) We did not bring in “buses of unverified Afghans”. We had multiple target sets coming from DC, as well as targets that had been cultivated in our JOC. 300 of the 500 people that we brought through the gate were orphans. Another 100 were Nazarene. The remainder were high value individuals assigned to us from higher echelon units, and family members of crews that were flying our chartered planes all week.

4) To the people that have been posting that they were unable to get their own personnel through the gate as a result of our buses – I’m very sorry about that. If the roles were reversed, I would be furious at me too. All I can say is that I was executing my assigned mission in order to save as many people as possible. I believe that everyone both supporting me and upset with me are good people. When you’re a good person, and you’re motivated to help, passion runs high. They wouldn’t be as good as they are if they didn’t care.

The account that criticized him shared his response in addition to some extra commentary. 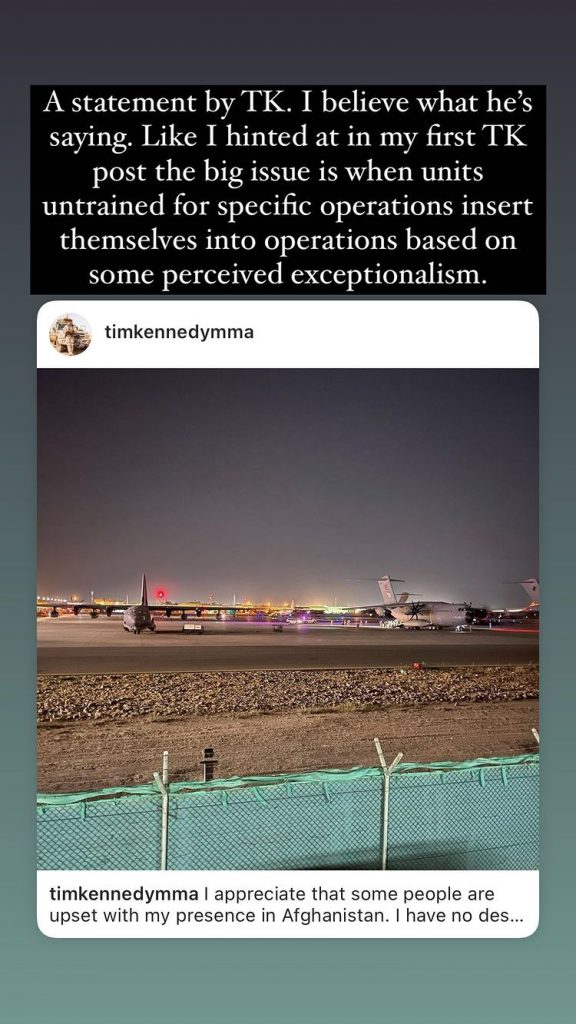 Love him or hate him, it’s very hard to take Kennedy seriously considering he’s willing to go the extra mile for a paycheck. In the past he’s advertised Alex Jones’ male virility supplement, he’s hunted Hitler and he’s apparently opened a school for 6 to 8 year olds to… become more masculine?

Wow haha. Neither of them laughed!? It’s like schaub was stunned to learn Hitler died…& Tim knew schaub did not know this !! Hahaha