It appears that Gordon Ryan has just signed a 7-figure deal with FloSports. The multi-time world champion will be competing in the organization’s Who’s Number One (WNO) Series. It is one of the top No-Gi Jiu-Jitsu event series and Ryan is its reigning champion.

FloSports CEO Mark Floreani has spoken about the deal, calling Ryan the “best no-gi jiu-jitsu grappler in the world,”. He also said that Ryan competing in the WNO Series will help them create the “biggest stage possible,”.

The “King” also discussed the deal on social media. He posted a picture with a really long caption on his Instagram. Ryan stated that because of this deal, he’ll be able to live like an athlete without having to do side jobs related to his field.

“My goal in this sport is (was) to get athletes (starting with me) to a point where they can live like REAL athletes while being ONLY athletes.”

Ryan has said that this deal will also benefit the sport and his fellow athletes.

“This is one of the most massive deals and milestones in the sport of jiu jitsu and is incredible for everyone in the sport. I said I was taking us to the next level, and I meant every word of it.”

Despite landing a great deal, Ryan says that he’ll still make a lot more from the royalties from his BJJ instructional videos. He also predicts that he’ll be the first BJJ competitor to have a net worth of $100 million. 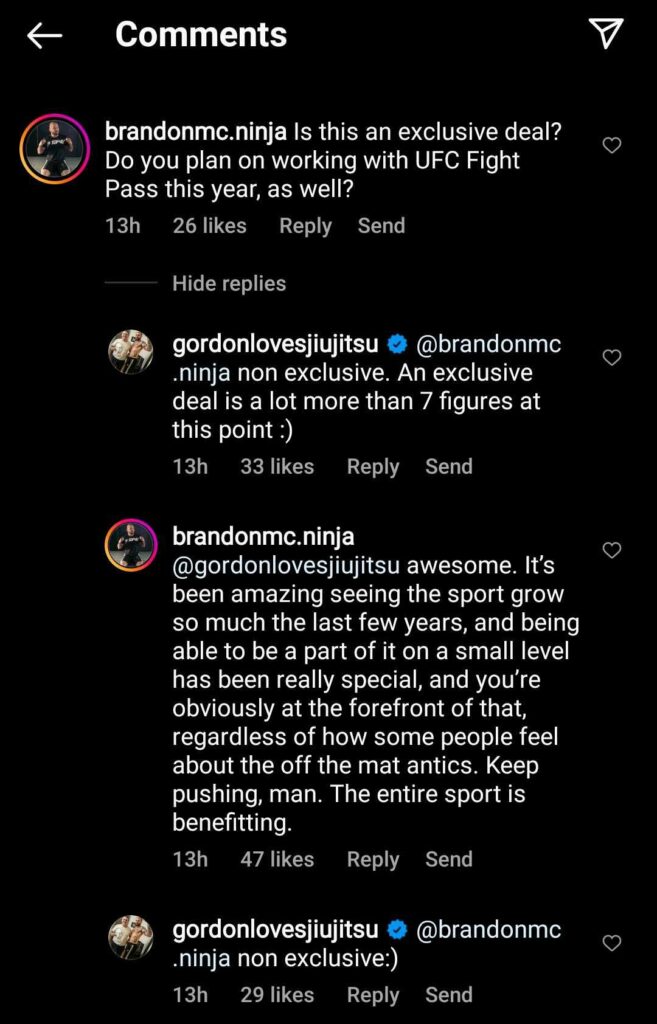 “I (we) are now on a different level. And for those wondering, competitions this year wont make me nearly as much (less than half) of my instructional sales. I will be the first jiu jitsu athlete worth 100m dollars, doubt me…More to come💰👑💰 @flograppling”

While the deal is certainly a game-changer, Ryan has also mentioned that it is non-exclusive. Which means that he’ll be free to compete under other organizations during its tenure.

This has caused many to speculate about his future with other promotions such as the UFC. Ryan competed in the UFC Invitational 3 and has responded to those asking about the company.

He praised the UFC, stating on an Instagram story that “they pay me, a lot 😉 2023 will be big”

This means that we could be seeing him compete in more UFC events during the tenure of his FloSports deal.

As a result, many are saying that maybe the grappling giants are overpaying him. Many online feel like the organization isn’t putting its money where it should.

For example, MMA writer Jack Slack criticized the organization for spending so much on Ryan, but not nearly as much on the quality of their last ADCC broadcast:

Got 7 figures for Gordon but will spend about three fiddy on the ADCC broadcast https://t.co/QEtrwOIj1m

Others are concerned that with Ryan being paid so much, it could have an adverse impact on what’s left for his fellow other competitors. This is because of the supposedly low profit margins of Flo Grappling.