Eddie Hall has some tough words to say to his opponent Thor Bjornsson, ahead of their upcoming boxing match.

Two of the World’s strongest men are expected to face each other in a boxing match this Saturday. The match is being called “The Heaviest Boxing Match in History”.

Thorn Bjorsson, known for his role as Gregor “The Mountain” Clegane in the HBO Series “Game of Thrones” is nothing short of what the nickname suggests. Bjornsson is nearly 7 feet tall and looked massively muscular during his days competing as a “strong man”.

However, after deciding to take on boxing, the Icelandic strongman lost around 120lbs (54kgs) and looks unrecognizable. 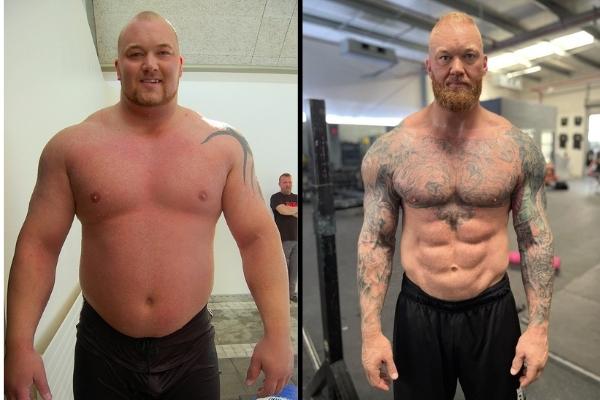 His opponent Eddie Hall was not impressed with Bjorsson’s new physique. According to the 2017 World’s Strongest man champion, he looks “too skinny”.

The British giant is sure that his opponent no longer has the strength to be able to hurt him, and will also gas out quicker after failing to improve his cardio.

“Thor, for whatever reason, looks like a skinny dog on heat,” Hall told Muscle and Health about his opponent’s transformation.

“For me, it’s just stupid. It’s supposed to be the heaviest boxing match in history, and he just looks ill.”

“I think he has genuinely got a problem with cardio. I don’t think he can sustain the full six rounds. I believe that’s why he’s lost so much weight. because his fitness levels are terrible.”

“I’ve wanted an excuse to punch this man in the face for a long time. Where I’m from, if someone burns you, you bite their nose off.”

Despite talking thrash about his opponent’s weight cut, Hall also lost quite a bunch of weight ahead of his boxing debut. He went from 432lbs (196kg) as the World’s Strongest Man to 355lbs(161kg) as he prepares for his foe Hafthor Bjornsson 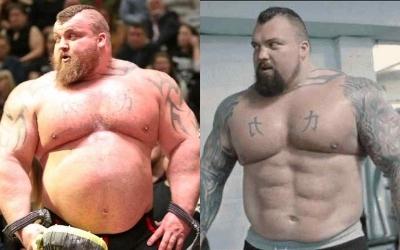 Eddie then explains that the dislike he feels for Bjorsson is nothing but genuine.

“We had to get along for professional reasons whilst presenting Strongman shows, but this fight, this is real.”

“I’m not a false person. I’m not two-faced, I hate Thor and he hates me. We’re gonna settle this like men should settle things.”

“This will not be left to the referee’s decision. This is either gonna be a knockout, or the fight will be stopped. ”

“Thor will either be on his back, or the referee’s gonna save his life before that happens.”

Hall then finishes his interview with strong words towards the Icelandic, “Just to finish up, Thor’s a c**t.”

The fight will take place this Saturday as Eddie Hall makes his debut in boxing while Bjorsson will enter the ring for the fourth time.

“The Mountain” already had 3 exhibition fights under his record, winning one of them while the other two were scored a draw.

Bjornsson and Hall were scheduled to fight last year. But the British was forced to pull out due to a bicep injury.

He was replaced by Canadian Arm-wrestler Davon Larrat. Bjorsson knocked him out in the first round.