The previous weekend, Bridges defended the IBF bantamweight world title against fellow Australian Shannon O’Connell. The match was on the undercard of Josh Warrington’s surprising defeat to Luis Alberto Lopez.

O’Connell’s described Bridges’ as a “skanky stripper” during the heated build-up to the bout. Bridges thus had more to prove heading into the event, and broke her hand as a result.

The Australian posted a photo of her swollen hand on social media.

She said, “Booked in for surgery on my hand this Friday. A lot of my camp was done with one hand. A lot of my sparring only using my left hand.”

“But there was no way I was pulling out of that fight cos I knew I could batter her with 1 hand if needed & I wanted to but now time to sort this. It’s a pretty intense surgery.”

Bridges continued, “They take bone from my hip and fuse my joints together. Bit of a lengthy recovery… but I am no stranger to injuries. Lol.” 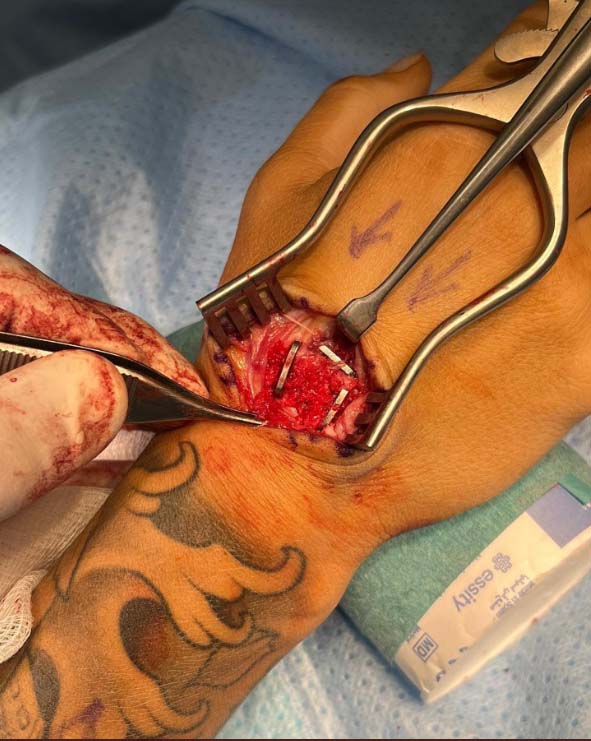 Bridges underwent the surgery on her hand on Friday successfully. She tweeted the graphic images with the caption: “Surgery done. Dr is happy.”

She followed up by sharing a photo of her hip, from which doctors had to remove a bone so that it could be placed in her hand. She captioned the picture: “Where they took bone from my hip to fuse my joints… Hurts more than the hand.”

Recently, she’s said that she makes a modest fortune from fans who pay to have their feelings hurt and get insulted by her.

The weird quirk is called “findom,” and Bridges is gladly profiting from it. The IBF bantamweight world champion earlier said that findom is her new source of income in addition to selling her wet socks, soiled workout clothes, and images of her feet.

“It’s pretty much calling guys losers and they give me money. Just insulting them and they just throw money at me. They just want to give me their money. I can easily make a thousand in, like, 20 minutes.”