If you’ve visited the global streaming platform Youtube in the past few weeks you may have been noticing peculiar UFC news conferences in your stream. Prior to this weekend the ‘livestreams’ were mostly re-broadcasts of old Conor McGregor interviews but something changed this past weekend.

The ‘hijack’ scam got a new make over. If you clicked on this UFC stream that was getting widely recommended you may have been able to notice that a channel appears to have the exact same logo and that the press conference featured Dana White talking about UFC on ABC 3 that happened this past weekend. You could also spot that the comments were disabled and that the description featured a fable of Ortega getting into a backstage altercation with Yair Rodirguez complete with Police involvement.

Of course, the altercation was in no shape or form mentioned on the stream – due to the fact there was none. If you were to fetch the file from the scammers link you would be infecting your pc with malware from the archive.

While it would be easy to blame the UFC for many of it’s flaws – this particular scam is mostly youtube’s fault. Youtube phased out the dislike button sometime earlier this year resulting in no easy way to verify the quality and the content of the clip you’re viewing.

In addition to this – there’s another feature that’s returning soon. A channel’s subscriber count could be privated so a stream like this one could easily fool you.

One sure way to check the legitimacy of the stream is to look in the URL bar – there you can see that the channel is not the official UFC channel that has close to 14 million subscribers. One thing we could begrudge the UFC – is they’ve never set a custom URL. So UFC’s official channel actually has the following link. 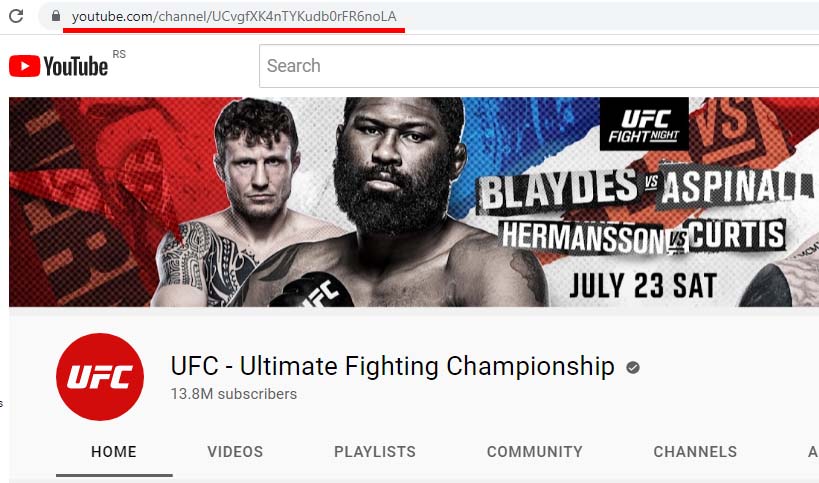 As for Ortega, he was actually quite amicable with Yair Rodriguez and had even apologized to his family backstage about the abrupt ending of their bout.