Brendan Schaub’s career is one of the most interesting in the world of martial arts. Up to 2020 – Schaub had managed to consistently fail upwards a feat that’s very hard to pull off in a sphere as hard as MMA.

In the world of Mixed Martial arts – a good performance can’t even buy you an electric vehicle today – and it especially couldn’t do that when Schaub was active. In many ways, Schaub’s most lucrative trait is that he is, or was a good friend of longtime UFC commentator Joe Rogan.

It was all going well – until Rogan announced his deal to stream exclusively on Spotify. This effectively meant that a number of things would have to change. For one – the rumored then confirmed 200$ plus million payday made Rogan’s closest friends the targets of cancellation attempts. There was the tasteless anecdote about Joey Diaz soliciting sexual favors in return for stage time, there were 20 year old sexual assault charges against Callen and there was a number of closely associated controversial personalities Rogan had to distance himself from.

With the closure of the Comedy store – Rogan had done the math and realized he stood to keep at least $26 million more if he were to move to a state that had no income taxes – like Texas.

Schaub initially planned to follow – but his family had nixed the idea despite his fresh new Texas tattoo.

But things would soon start crumbling down. His long time podcasting partner – Bryan Callen was now toxic to advertisers which meant he was off the podcast. In the absence of Callen, Schaub got too high off his own supply and had struggled to find a cohost he could gel with. Further he was no longer the affable ex fighter – he was just a serial podcaster with a lot of shamelessness. During his time in Rogan’s orbit, Schaub managed to secure a deal to analyze fights on Showtime and even get a second show with Food truck diaries.

Of course, the breakdown in his relationship with Showtime wouldn’t be apparent until the beginning of his feud with Ariel Helwani. Helwani had insinuated that Schaub was securing guests thanks to his close ties with Rogan.

“Don’t talk about people’s jobs,  that’s how we got into this mess. Don’t talk about people’s livelihoods when you don’t know. Again, you keep doubling down you’ll text me and you’ll apologize and then you’ll  keep talking about it again. So, the bottom line is – tired of people like you, spitting lies, bsing us all, pretending like you know what you’re talking about.”

But Showtime wasn’t pleased about the outcome of the partnership and had opted to discontinue the ‘Big brown breakdown’ and the ‘Food truck diaries’. Schaub’s reply to this was to start his own network. This, of course, is a solid impulse and had he had any talent it could’ve produced interesting results. Despite the fact that Schaub wouldn’t admit it – The Fighter and the kid was a part of a podcast network called Kast media. They were securing the advertising for his podcast and using the subscriber numbers to overpay TFATK.

So Thicc boy was born. Schaub bootstrapped the youtube channel and gotten Rogan’s blessing to knock off the beloved Fight Companion. Now that Rogan had strayed from Eddie Bravo and that Callen was as toxic as he’d ever be there was nothing in it left for Rogan – the JRE spin off show couldn’t continue. Thus the Calabasas fight companion was born – one of the only shows that actually has some viewership on the network.

The channel currently features a number of podcasts – but the one we’re focusing on today is Fight Night flashback. Schaub’s brilliant idea to get some viewers onto the channel actually relies on content that doesn’t belong to him.

Each episode of the ‘new podcast’ features Schaub and a guest discussing while the UFC footage can be seen on screen. Earlier episodes of the show featured unmorphed content but he’s since wizened up to Content ID and has started using filtered footage – in order to be able to monetize it.

The interesting bit is that not all of the footage discussed is featured – it’s usually toward the end of the hour long episodes. 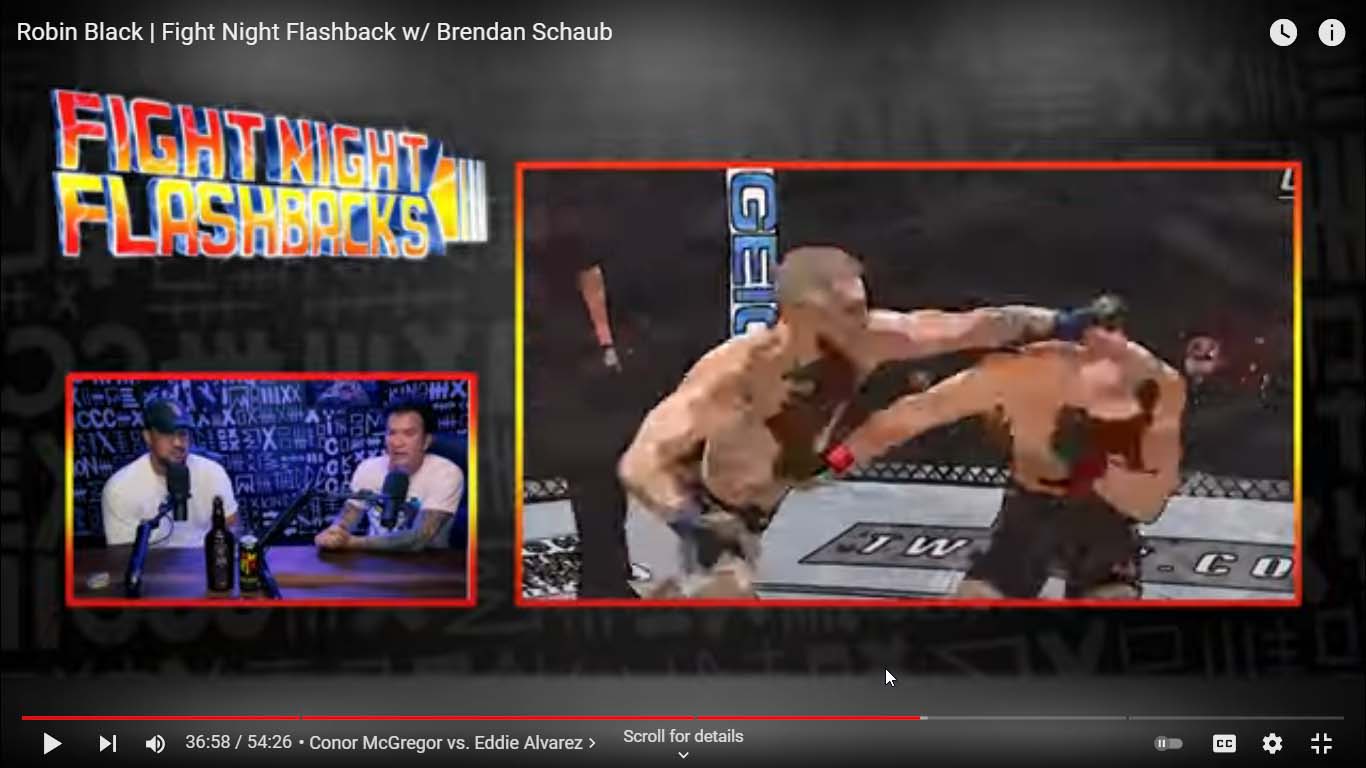 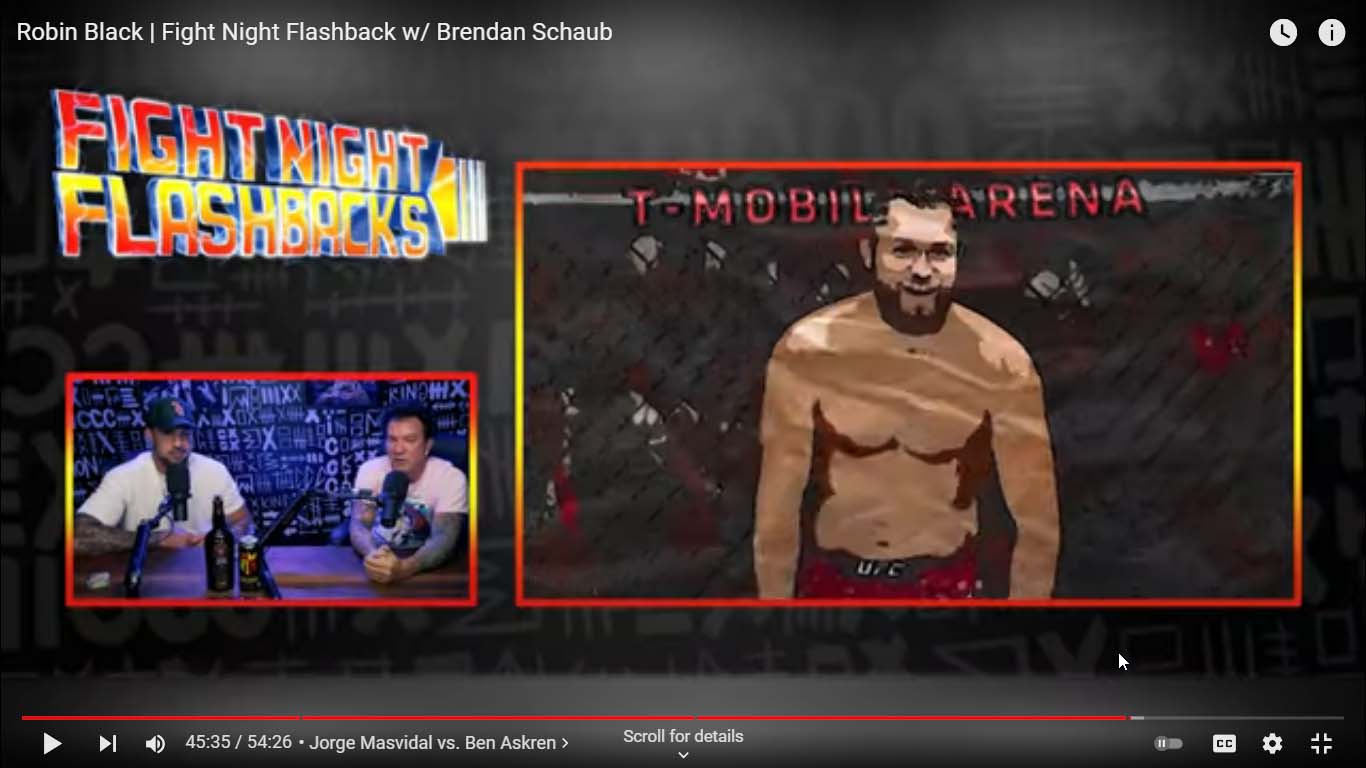 This possibly wouldn’t be quite as jarring if Schaub hadn’t personally contributed to the closure of reddit community r/mmastreams in the past. 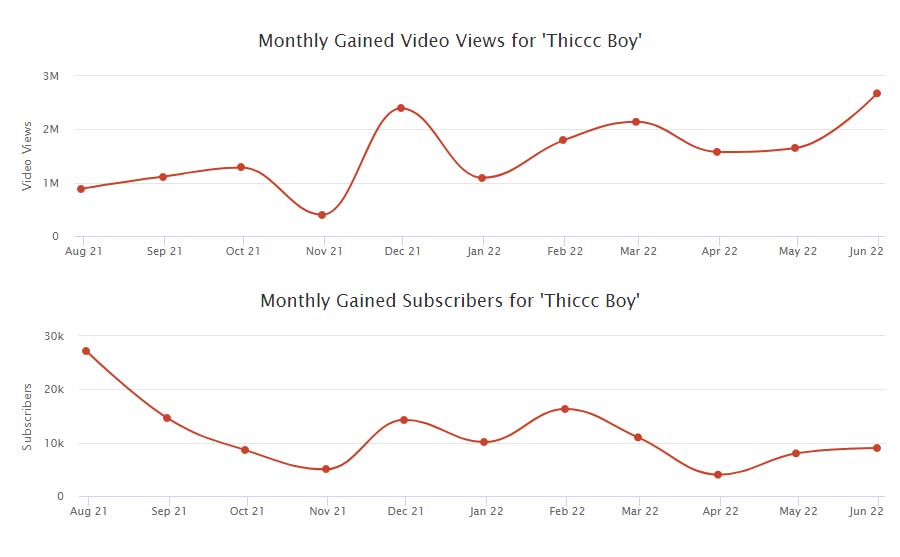 If you look at his channel stats the story of his podcast network seems even more interesting – because it seems as though the number of the views they get per month actually adversely affects the number of subscribers.

The influx of views you’re noticing in May is tied to the release of the critically panned special Gringo Papi – which Schaub did his best to promote – but as so you can see those views didn’t really translate into viewership at all.

As is, his podcasts are really struggling and especially those that belong to the side characters in his various podcasts.

From the production value to the filtered footage – it’s a very interesting case to observe and goes to show you just how much can be accomplished if you’re shameless enough and have famous friends. We’ll stay tuned.