Darren Till has been sidelined for quite a whole due to issues with his knee stemming from Robert Whittaker bout back in 2019. But regardless of his absence from the cage he’s as popular as ever in MMA fandom.

Till has had 5 cancelled bouts in the last 2 years and just one actual bout. Till has had bouts with Robert Whittaker, Jack Hermansson, Marvin Vettori and Derek Brunson all be cancelled with some of them getting rebooked.

His popularity isn’t suffering  in part due to his kinship with rising star Khamzat Chimaev. The two have hit it off from the get go and as rare European resident UFC stars struck up a friendship.

Till is also quite a talker – as are most Liverpudlians on UFC roster. Just as his ‘drama’ with Daniel Cormier was dying down, Till stroked a new controversy having shared that he’s now reached a landmark of 25 clean USADA testings.

One of Till’s fans took umbrage with the language Till used to announce he’s ’25x tests clean’ and wrote:

“Anyone that has to showoff they are clean has a guilty conscience. Dude it’s literally part of your job. “Look at me I’m clean yay”” 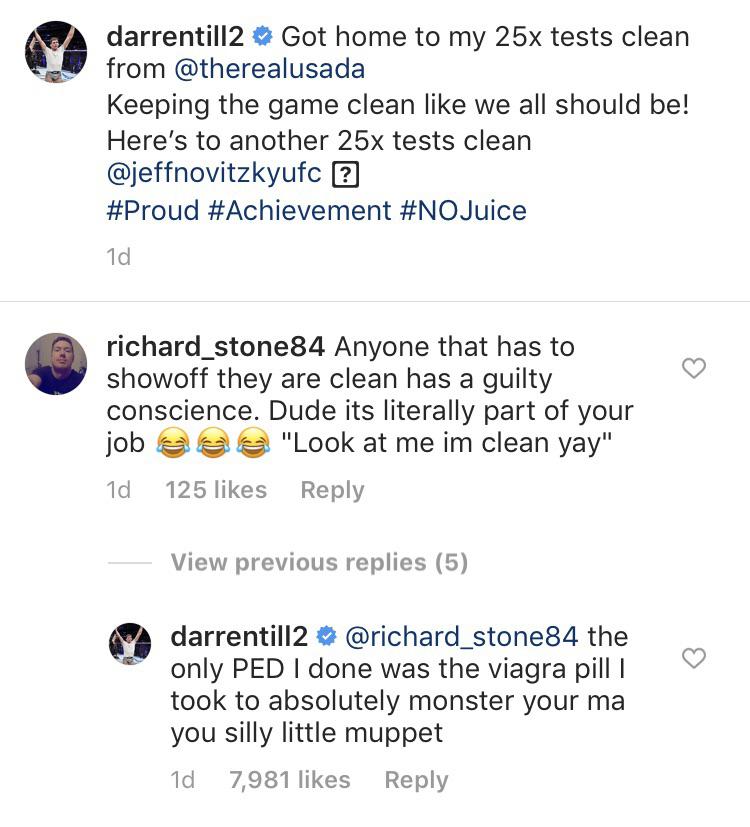 Till responded to make somewhat of a personal mock confession and explained what he’d planned to do with his keyboard warrior’s mom.

Till had previously announced a comeback ‘tour’ saying:

““We’re a few weeks into getting back,” Till told ESPN. “Khamzat’s fully in camp now for this fight with Nate Diaz, so I’m like in camp helping him, but I’m in camp for myself to come back. The body’s never 100 percent, but I’m coming back what I used to be like – healthy and fit and ready to get a world title, get some wins in”

“Massive fight against one of the best strikers in the division, so this is all just about getting back now. I wanna have to fights by the end of this year, just boom boom, then next year’s a big year. The comeback is on!””

Of course it’s not set in stone. TIll’s coach Colin Heron revealed he completely tore his ACL nine weeks before facing Brunson in 2021 and he does not appear to have undergone surgery. Instead he was spotted receiving PRP injections into his knee.