Dana White is an interesting personality. The longtime UFC president has been kept on board as UFC changed ownership thanks to his media savviness.

After any major UFC event, White is on hand to answer media questions. However White is definitely not afraid to push back and to even outright suggest media had no place asking him questions on a certain topic.

UFC 282 was no different, after the event White answered media’s queries and was dismayed when someone brought up an answer he previously provided. 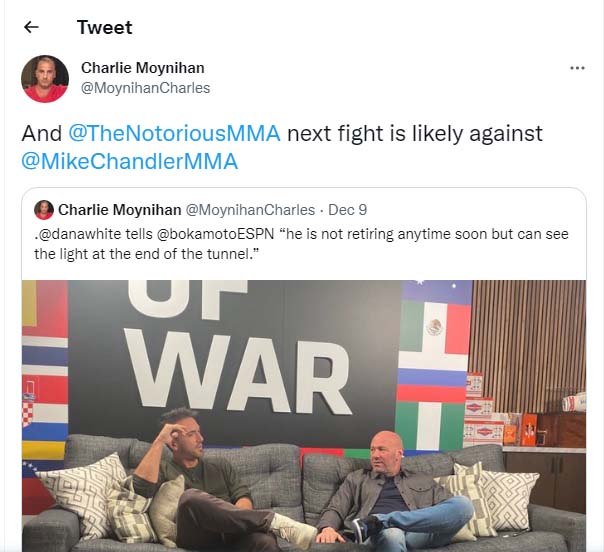 White was unamused and debunked he said that at UFC 282 presser. He clarified:

“I never said that, ever f—in’ once,” White told media. “This is what happens when you do interviews, and people listen to your interviews.”

“They said, ‘So, if Conor McGregor came back right now, who would you be looking at as an opponent?’ I said, ‘Well, if he did, if that happened, and that scenario played out right now, Chandler would be a fun fight.’ Never f—ing once did I say Conor McGregor vs. Chandler.”

“I don’t even know when Conor McGregor’s coming back. And this is why I don’t like to answer these kinds of questions. Because some f—king idiot somewhere on the internet puts out that that’s what I said, and it’s not even remotely close to what I said.”

McGregor’s return is under a question mark thanks to the fact he admitted he’s not even in the USADA pool.

White was also dismayed to get questions addressing McGregor’s PED use in order to hasten recovery – and instructed the media to direct their questions at USADA chief Jeff Novitzky.

USADA recently announced they would be changing their rules in the fall out from the McGregor situation.

“The UFC may grant exemption to the six-month written notice rule in exceptional circumstances or where the strict application of that rule would manifestly (be) unfair to the athlete, but in both cases, the athlete must provide at least two negative samples before returning to competition.”