Dana White may have been silent on social media ever since he pulled a disappearing act in the middle of UFC 270 but he’s certainly not silent now.

UFC president appears to have gotten over his temporary shyness and is now addressing criticism.

During his Q&A Wednesday on ESPN+ White said:

“For anybody thinking I was showing any type of disrespect towards Francis: I saw Francis all week, you idiots. I shook his hand, I said hi to him, I was out there for the staredowns, the whole thing. So for anybody to think that there was some type of disrespect shown towards Francis—I wasn’t out there for [Michael Bisping vs Luke Rockhold 2 at UFC 199], either, because I was dealing with some stuff. And I sprinted from the back. I didn’t even have my jacket on. I still only had my shirt on to go out there and put the belt on Bisping, but I couldn’t make it out there to put the belt on Francis.”

“There’s only been one time that I’ve walked out on a fight and made it very clear, showed up to the press conference and said, ‘This is exactly why I left.’ It was in Abu Dhabi. So there’s the answer.”

White also addressed another big issue – if he’d be looking to book Jon Jones vs Ngannou in 2022:

“And I think another big fight, if it’s possible to get it done, would be Jon Jones and Francis.”

While White appears to be denying reports of his temper tantrum – the users on social media aren’t buying it. 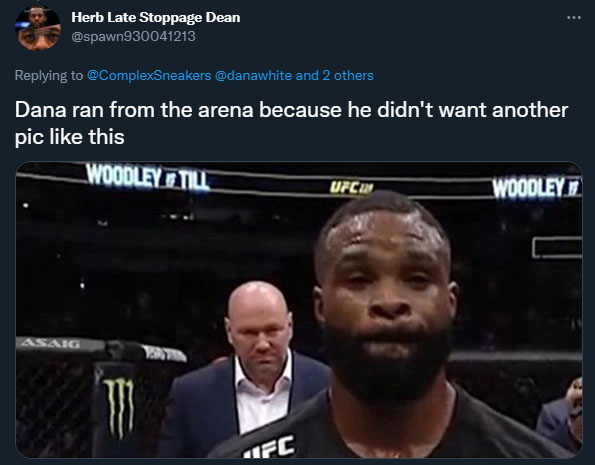