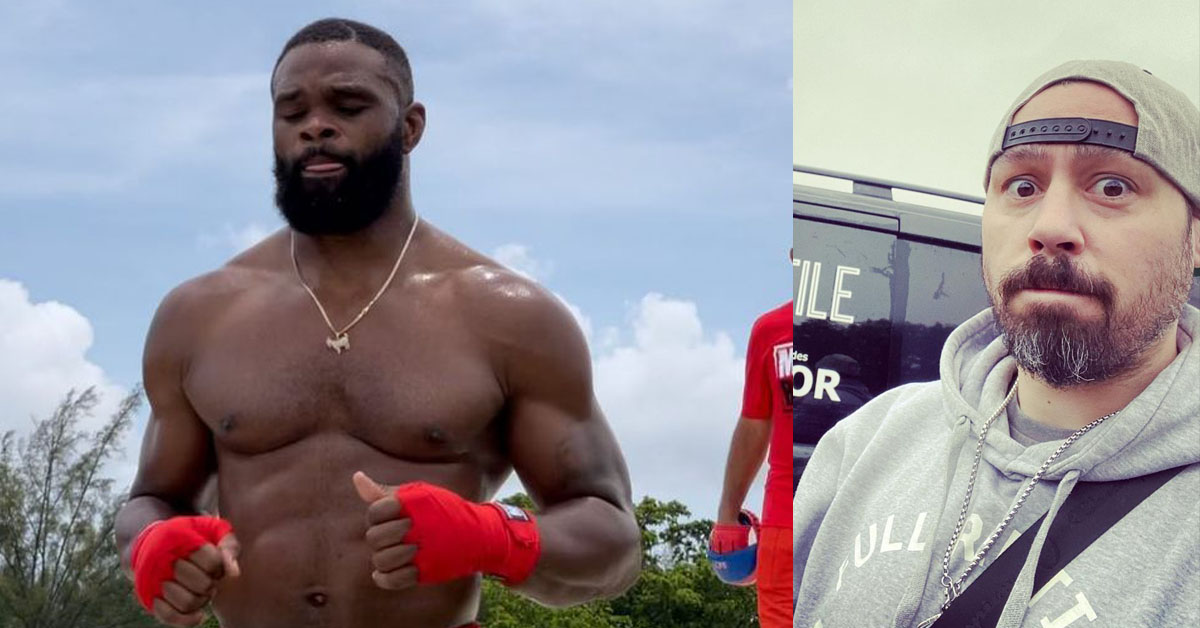 The boxing mania just won’t go away. The latest strange exhibition in talks is a match up against two UFC Welterweights with a beef to settle. On one side there’s disgraced UFC commentator Dan Hardy. Hardy’s employment prospects have been gloomy ever since he allegedly got into a verbal conflict with a female member of staff at an UFC event in Abu Dhabi. This event is said to be the cause for firing of Hardy by both the UFC and BT Sport.

This lead Hardy, 39, to try and resurrect his career in different promotions. One option being discussed  currently is a ONE FC Muay Thai match up against John Wayne Parr (45).

Hardy hasn’t fought since 2012. Back then Hardy was diagnosed with Wolff-Parkinson-White syndrome. Wolff-Parkinson-White (WPW) syndrome is a relatively common heart condition that causes the heart to beat abnormally fast for periods of time. The cause is an extra electrical connection in the heart. This problem with the heart is present at birth (congenital), although symptoms may not develop until later in life. However Hardy refused to correct it with surgery rendering him unable to compete in UFC.

And as we all know Tyron Woodley is looking to cash in on his infamy following the Jake Paul boxing match up. Apparently this opportunity was lucrative enough for Woodley that he didn’t even mind getting the tattoo of the youtuber’s name- albeit to no avail. That payday seems long gone. Still Woodley’s prospects are certainly much better than Hardy’s – for one he was a UFC Welterweight champion.

Hardy seems to be doing his best to make this lucrative offer materialize. He’s even leaked the DMs he exchanged with The Chosen One aka Woodley. 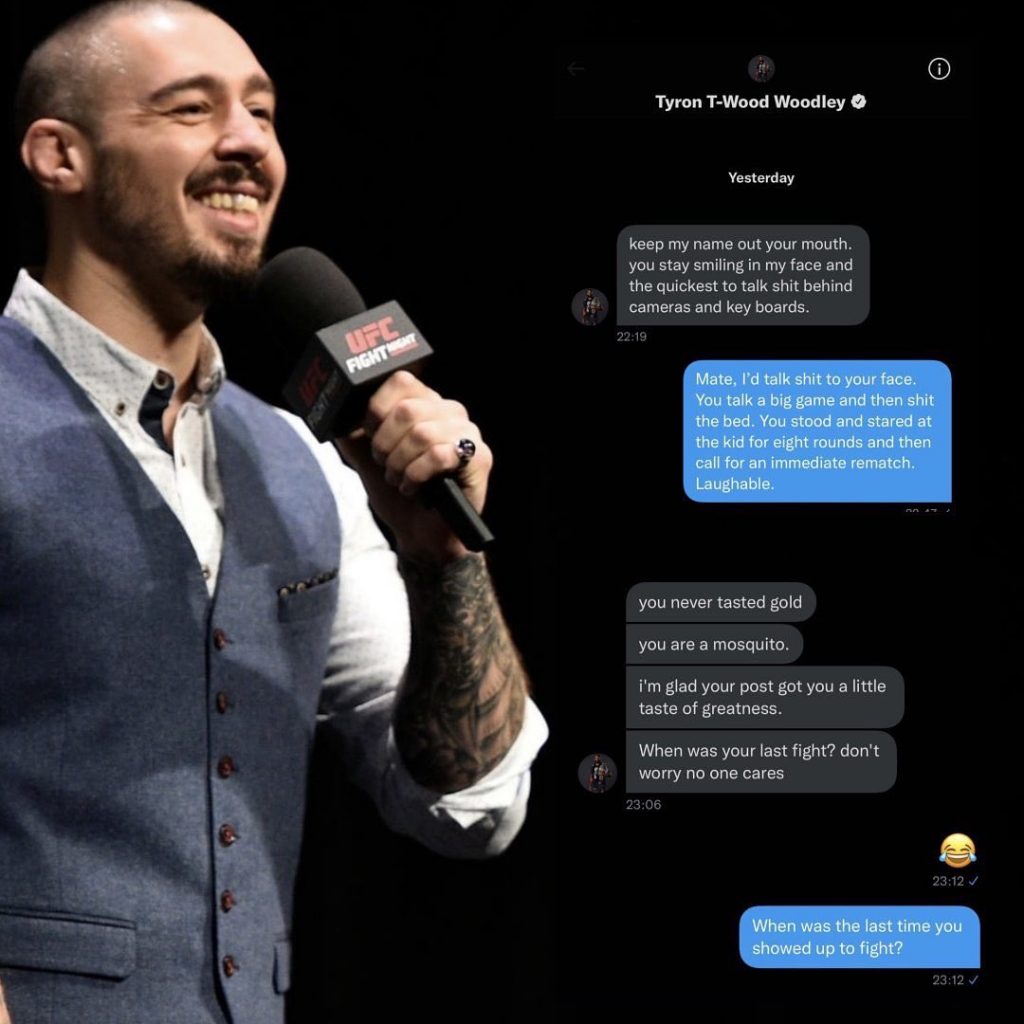 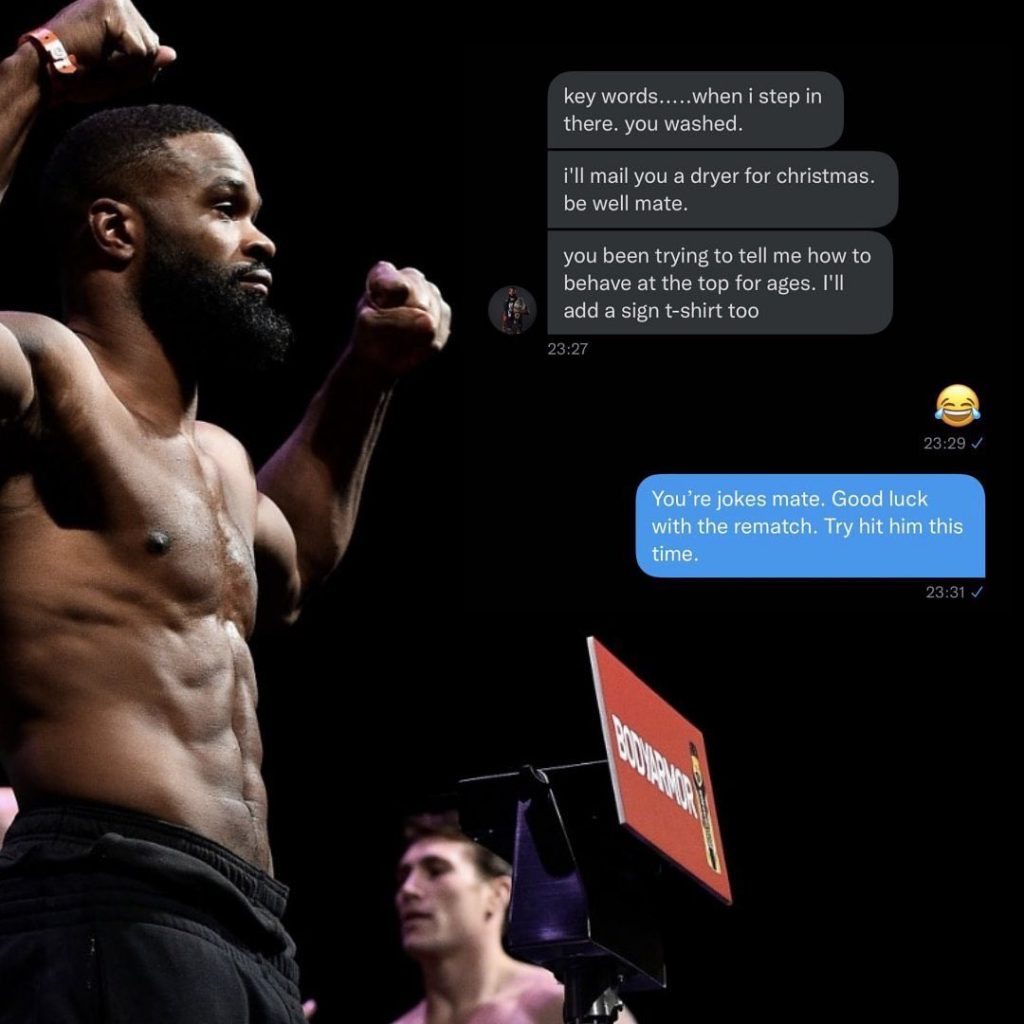 Hardy even went on Submission Radio and tried to amp up the public:

“My contract is signed. And I know that he’s got a contract sitting in front of him, and the deadline is approaching, and he doesn’t want to sign it,” Hardy said on a recent appearance on Submission Radio. “And I don’t know why. I don’t know what the deal is because terms have been agreed, money’s been agreed, date’s been agreed, rules and conditions, weight class—everything’s been agreed. But he hasn’t yet signed the contract. So you tell me. Tyron Woodley, why have you not signed it, The Frozen One?”

As for Woodley MMAFighting editor revealed he has multiple offers on the table:

Hearing that Tyron Woodley has multiple offers on the table right now for his next fight — some very lucrative offers at that — but nothing has been decided just yet.

The fight with Dan Hardy could still happen— just not based on this particular offer.