Hardy is one of the rare analysts out there willing to go against the grain due to the fact he was fired by UFC after a widely publicized dispute with Herb Dean followed by a dispute with a female employee in Abu Dhabi.

At the time Hardy was commentating for UFC.

In a recent interview with the “Freedom Pact” podcast, Hardy said:

“And then going into the fifth round, and you have one guy that’s being beaten senseless by another fighter, right? Now, there is no reason why that fight shouldn’t have been stopped at the end of the fourth round.”

“No discredit to Calvin Kattar, but he didn’t earn anything by taking that fifth round beating. But what we did see was that clip coming out of Dana talking to Hunter (Campbell) and being like, ‘Hey, we need to make sure he goes straight to a doctor after that.”

“And it looks like, ‘Hey, they just caught this on camera across the arena.’ The dude was mic’d up. The receiver of the microphone was attached to the camera that was filming him from across the other side of the arena.” 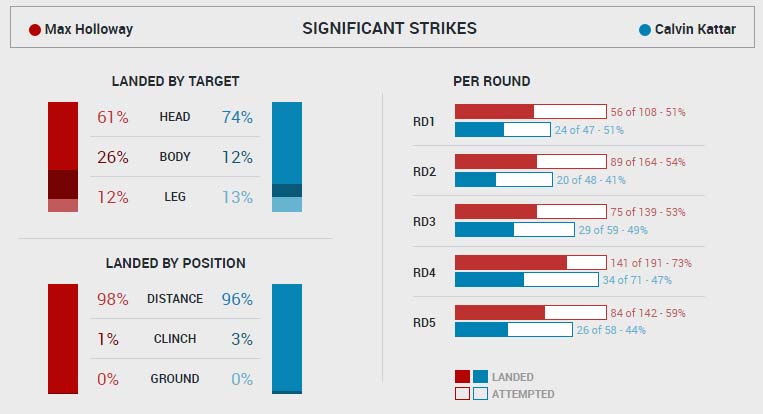 Dana White said after the event:

“I thought the fight should have been stopped in the fourth round,” he said.

“I was freaking out a little bit. I said [to his coaches] he’s not going to stop and talk to anybody. We’re going to take him straight to the ambulance and send him to the hospital.

“Then I went over to him and I said ‘you’re so tough, what an unbelievable performance’ and he said ‘that’s not what I want to be known for.’

“He goes ‘but I’m not going to back down to anybody’ and I said we’re going to send you straight to the hospital right now.

“I don’t want you talking to anybody or doing anything. He started laughing and thought that was funny. He’s in good spirits, his head is clear.”

Kattar absorbed the biggest number of significant strikes of anyone in a single bout in UFC history against Holloway pic.twitter.com/bMDAWxOKzb

Kattar absorbed the biggest number of significant strikes of anyone in a single bout in UFC history. Kattar’s coach then shared:
“Kattar sustained a broken nose in the fight and also required eight staples in his scalp to close the wounds Holloway opened up with his relentless offense,”