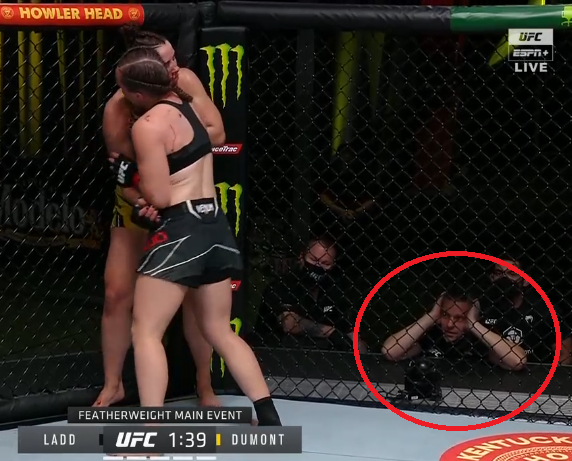 Corners are often not particularly pleased with the performance of their fighters. One such example was Valerie Loureda’s performance several months ago. In the performance Loureda repeatedly kept trying to do spinning moves with little to no success.

But this cornerman has nothing on the coaching Aspen Ladd received last night.
“You’re down 3 to 0. Please tell me what you’re doing,” West said to Ladd. “You have to throw more than one punch.”

"Please, tell me what you're doing?"

Aspen Ladd's corner was not happy ?

Many pointed out that this was not particularly helpful – nor inspiring.

Aspen Ladd’s corner after every single round pic.twitter.com/o9o2xP22C6

Ladd getting absolutely scolded in the corner

This is ABUSE, what a douche

But what many aren’t aware is that he’s used this approach before – and to a significantly better end result. Back when Ladd was fighting Yana Kunitskaya – his sternness worked and Ladd promptly KOed her opponent in 3rd round.