Prior to their undisputed middleweight championship battle in London, Claressa Shields denied having sex with Savannah Marshall. On Saturday at the O2 Arena, Shields defeated Marshall on points in a historic night for women’s boxing.

Their grueling championship match, which resulted in Shields’ well-deserved triumph, served as the highlight of the first all-female British boxing program.

The bout was scored 97-93 by two judges, and 96-94 by the third. The victory was given to Claressa Shields.

Claressa Shields comes out throwing everything in RD1 😳 #ShieldsMarshall pic.twitter.com/xlklj2r2KP

Shields and Marshall squared off on The Gloves Are Off program on Sky Sports. The event was presented by former cruiserweight world champion Johnny Nelson.

Shields bizarrely denied having sex with her British opponent during the tight match. Shields and Marshall had differing views when talking about what had led them to this stage in their careers.

Marshall started by saying, “The fact that I won got us here.”

Shields then responded sarcastically: “Yeah, sure.”

Marshall then replied: “The fact that we were both screwing each other got us here.”

Shields then appears to be confused. She says: “I didn’t have sex with you.”

Marshall then responds: “You did, you did.”

Shields then added: “It’s the fact that I even gave you attention.”

Marshall fired back by saying: “Are you joking? You lost the plot. Your head fell off. You lost all self-control.” 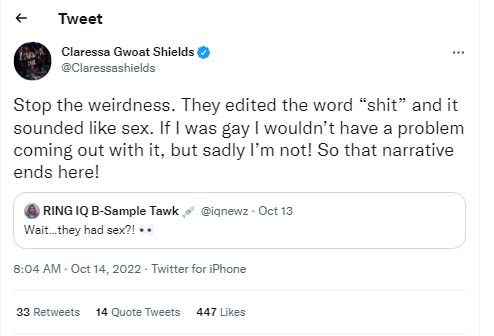 It’s unclear if Marshall was being totally serious when she answered or whether Shields misheard her opponent.

One boxing fan tweeted in response to the exchange: “Ngl this added a whole other layer to the fight and I’m surprised it took this long for them to whip it out.”

Shields was proclaimed the undisputed middleweight champion of the world after her victory over the weekend. She has now prevailed in all 13 of her professional contests. A match against Marshall, a rival she faced in the amateur ranks back in 2012, was the only one to record a loss.

Why is this trending on TikTok and Did he put something on the towel and wipe my back with it… this video crazy!!! pic.twitter.com/TbIGELUkEK