Chimaev was indeed spotted on social media in the Akhmat MMA facilities alongside one of the sons of Chechen dictator.

According to same source Allstar Sweden  is trying to get the government of Sweden, where he currently lives and trains, to bring him back to the country.

Shammas let Brett Okamoto of ESPN know that Chimaev plans to leave in two weeks and is spending time with his family. This is a carefully worded statement that doesn’t really refute the source’s claim that Chimaev’s passport was confiscated in St. Petersburg.

I just spoke to Khamzat Chimaev's (@KChimaev) manager Majdi Shammas, who told me reports of Khamzat being stuck in Russia with a revoked passport are not true. Khamzat is in Russia, but there are 'no problems' with any travel restrictions according to Shammas.

Chimaev made an appearance last night at the ACA MMA show. 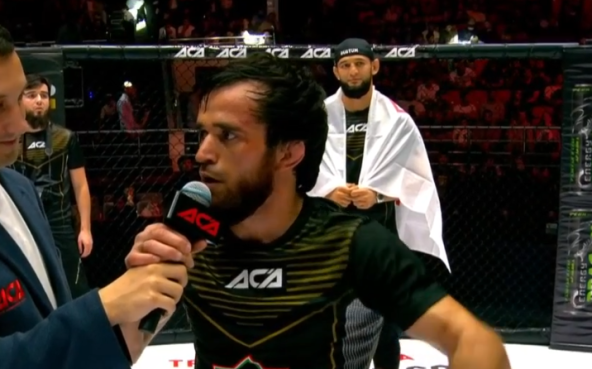 As per MMA megafan Caposa, Chimaev is currently in Gozny at ACA 146. His friend Rasul Albaskhanov just won.

As per the same source, the feed of the MMA event tried hard to make sure he was in the backdrop.

they definitely were making sure he was on camera pic.twitter.com/90Fht93Mrc

Fans were quick to assume Chimaev was akin to a hostage victim and even photoshopped this nugget: 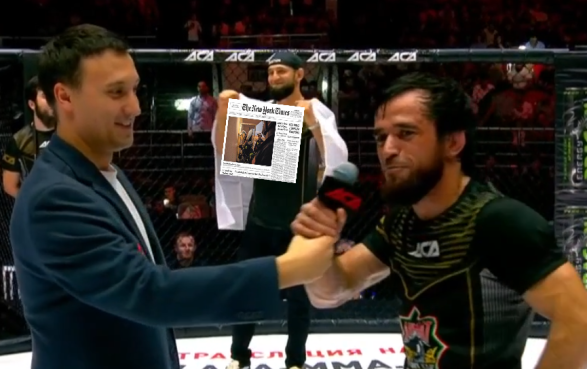 Chimaev storied a number of pictures from different occasions he had met and been amicable with Chechen leader on his personal account. He didn’t address the rumors at all.

His coach Andreas storied the following: 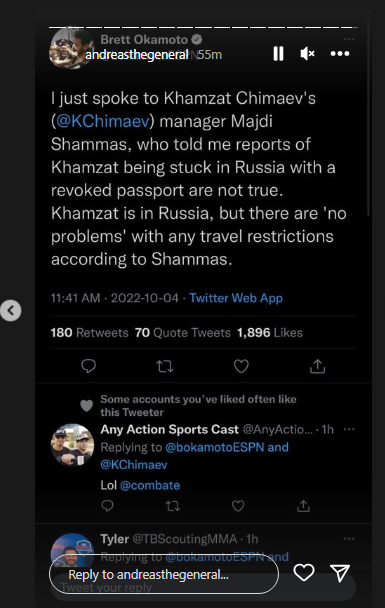 Chimaev told ESPN: “I will start training camp, fight somebody, find somebody, smash somebody, make money.”

Khamzat Chimaev (@KChimaev) tells me he is visiting family in Russia and will return to Sweden in two weeks. “Start training camp, fight somebody, find somebody, smash somebody, make money.”

The Brazilian film release Chimaev was supposed to attend is booked for tomorrow so it’s definitely surprising to see him say he’s planning to stay there for two more weeks. It does raise the question whether something happened to force him to extend his stay.

While this might seem unlikely as a political move, considering the amount of bad PR it stands to generate it’s not exactly unprecedented. NHL’s Ivan Fedotov has been compelled to serve a full year in the military and thus won’t be an option for Philadelphia in 2022-23.

Combate hasn’t issued a rebuttal of their story as of yet. Story developing.