Brendan Schaub has been all up in legal arms ever since his protector, Joe Rogan, moved to Austin.

“This is quote, this is a direct quote: you’re finally going after anyone who harasses you online including comics, that you have spent half a million dollars on monster lawyers and that you have friends in dark places who are gonna get the job done” Khalyla read out in front of Brendan Schaub.

Previously we’ve talked about Schaub filing a lawsuit against a small youtuber in order to censor the rumors of his philandering.

Without the patronage of Joe Rogan, Schaub is often forced to reinvent the wheel in order to gin up interest in his brand. However pivoting from one controversial take to another can lead to unintended, if not sometimes comical results. In the latest example of contradictory positions – in spite of heaping praise at Spotify’s ‘anti woke’ CEO just last month, Schaub has repeatedly attempted to censor a small channel dedicated to reacting to his own content.

During a 3 minute video on his channel, the creator shared some bits from the law suit filed by the THICC BOY Productions Inc. Creator is reportedly being sued for copyright infringement. That channel has been terminated since.

The channel “Yew-neek-ness” has reportedly been struck after posting a video of Schaub exchanging a phone number with a young lady. While this infraction is nothing compared to the trouble his comedian buddies get into (h/t Chris D’elia & Bryan Callen ) – Schaub is currently married and has two kids.

This is why he believes his character is being defamed.

“Yeah, that’s that’s the thing with like, you know, defamation of character stuff like that. That’s even like the narrative on me, which I don’t talk about with. ”

“You know, I have a lawsuit against this YouTuber who’s a small time YouTuber, if you don’t know the background and like, “Oh, it’s this guy who’s big in the space suing the smaller guy”, no, I don’t give a f**k.”

“If you want to criticize my fight picks, my stand up, my podcast. That’s what I’m a public figure I signed up for that, that stuff does not bother me. But when you start slandering my name, stealing content, and creating this false narrative of cheating on my wife and do all this crazy s*it and defamatory stuff, and using content and the clickbait stuff like that, for years, well then you’re not playing the same game man. ”

“So this narrative that oh, this this bigger YouTubers suing this other YouTuber for no reason to silence him. You know, I thought you didn’t get down with cancel culture. I don’t in any facet – This is different. You got you got to know your facts, ya know your details. “

“it’s gonna affect his bottom dollar. And that’s when this has to be addressed. If you don’t say oh, he has the s***tiest fight picks or he’s bad at English or you know, I didn’t like a stand up, I think Louie CK is better. No, she’s fine. That’s all good. That’s fine. But then when when you start going down that dark road, man, you start going down, you know, these, these click baity things that are defamation of character for years, years years, hundreds of videos for years”

Defamation, in law, is the act of communicating to a third party false statements about a person that result in damage to that person’s reputation.

But what Yewneekness did wasn’t really spreading any false rumors. He was sharing a CCTV video of a Schaub exchanging a note with a young lady.

Assuming the contents of the note is perhaps worth a second thought – but this isn’t the first time Schaub was presumed to be engaging in philandering. Previously a number of DMs leaked that showcased that philandering was not out of character for Schaub. 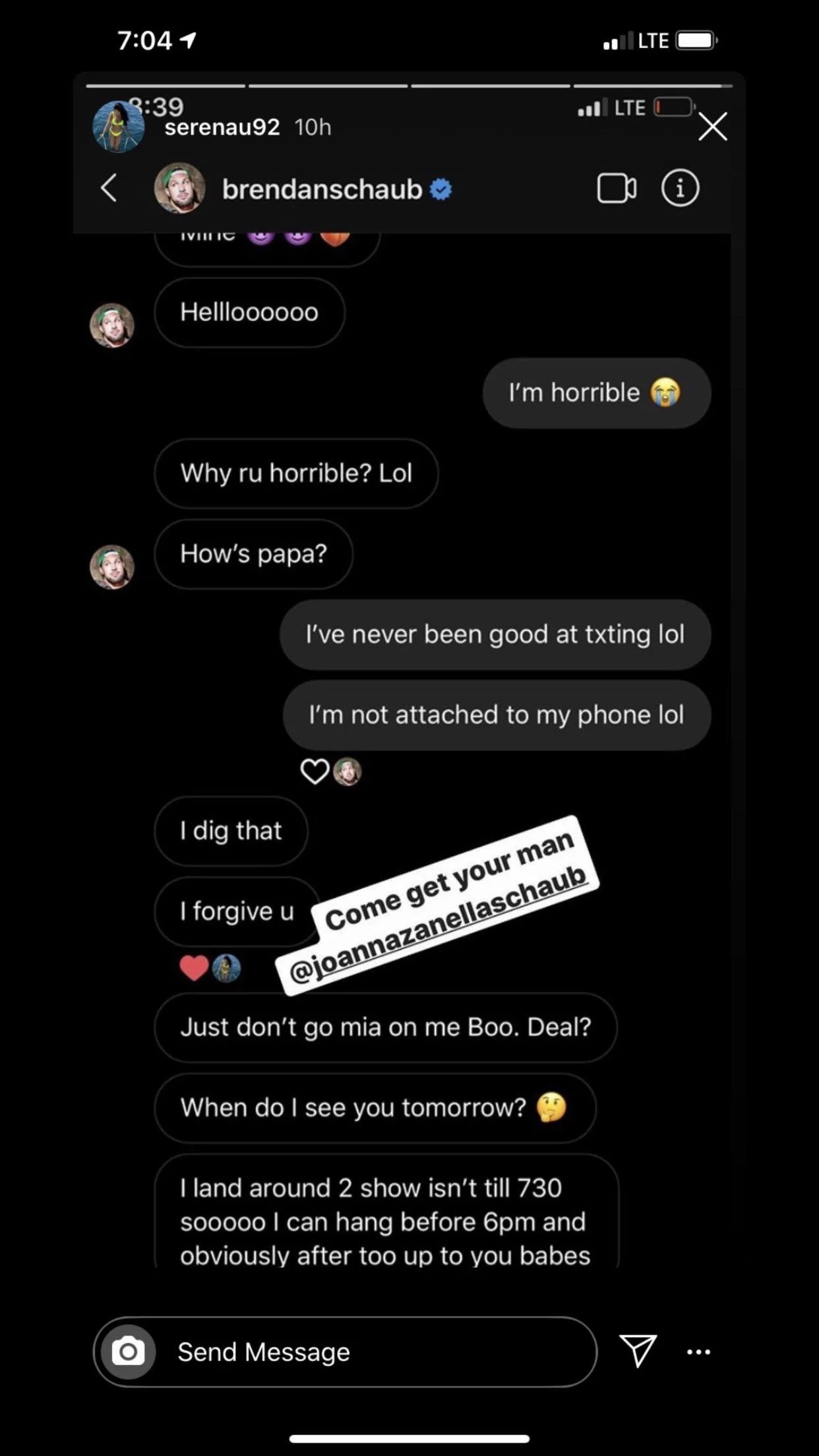 And of course Khalyla Kuhn outed him for making advances toward her 7 years ago – while both she and Schaub were involved in their current relationships.

Not to mention the trugg walg gate that started the Bobby Lee bullying avalanche.