Bryce Mitchell is quickly becoming the Tony Ferguson/Kron Gracie mash up for the next generation.

It was just last week that Mitchell was lashing out on Nasa and offering alternative takes on history but he’s ready to rock our worlds once again.

Bryce Mitchell is a very talented athlete and has a bright future in the octagon. But he is also a bit too engulfed with conspiratorial thinking. The featherweight prospect has made several wild theories in public.

‘Thug Nasty’ won all of his 14 professional MMA outings. He had his first event in the UFC in March 2019 and has gone 4-0 within the promotion. The 27-year-old is currently number 9 in UFC featherweight rankings. 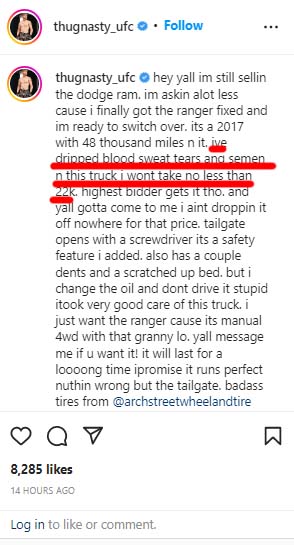 Considering that earlier this week Hannah Goldy scored a hefty payday by selling her undergarments perhaps Mitchell isn’t too far with his request you pay extra for his DNK.

Mitchell declared his desire to sell the truck for as much as $22,000, justifying the price by saying:
“22k. highest bidder gets it tho. and yall gotta come to me i aint droppin it off nowhere for that price. tailgate opens with a screwdriver its a safety feature i added. also has a couple dents and a scratched up bed. but i change the oil and dont drive it stupid itook very good care of this truck. i just want the ranger cause its manual 4wd with that granny lo. yall message me if u want it! it will last for a loooong time ipromise it runs perfect nuthin wrong but the tailgate. badass tires from”

Mitchell is refusing to train with other UFC athletes because he claims this would give him the competitive edge.

He also believes there’s a religious aspect to it:
“Now, when I go through these processes, it feels like a religious experience. I feel an overwhelming sense of purpose and passion for what I’m able to do, and I feel so blessed to be there and happy I’m healthy enough to put on a show for y’all and so happy people want to see me.”

“I feel appreciated, and it feels amazing.”