Bryce Mitchell believes in a number of conspiracies that are ‘out there’.

In addition to accusing NASA of stealing tax dollars he also questions the veracity of tragic events.

And in between educating Ariel Helwani on confederacy on the MMA Hour and reading up on flat earth, Mitchell’s eye caught an interesting post. 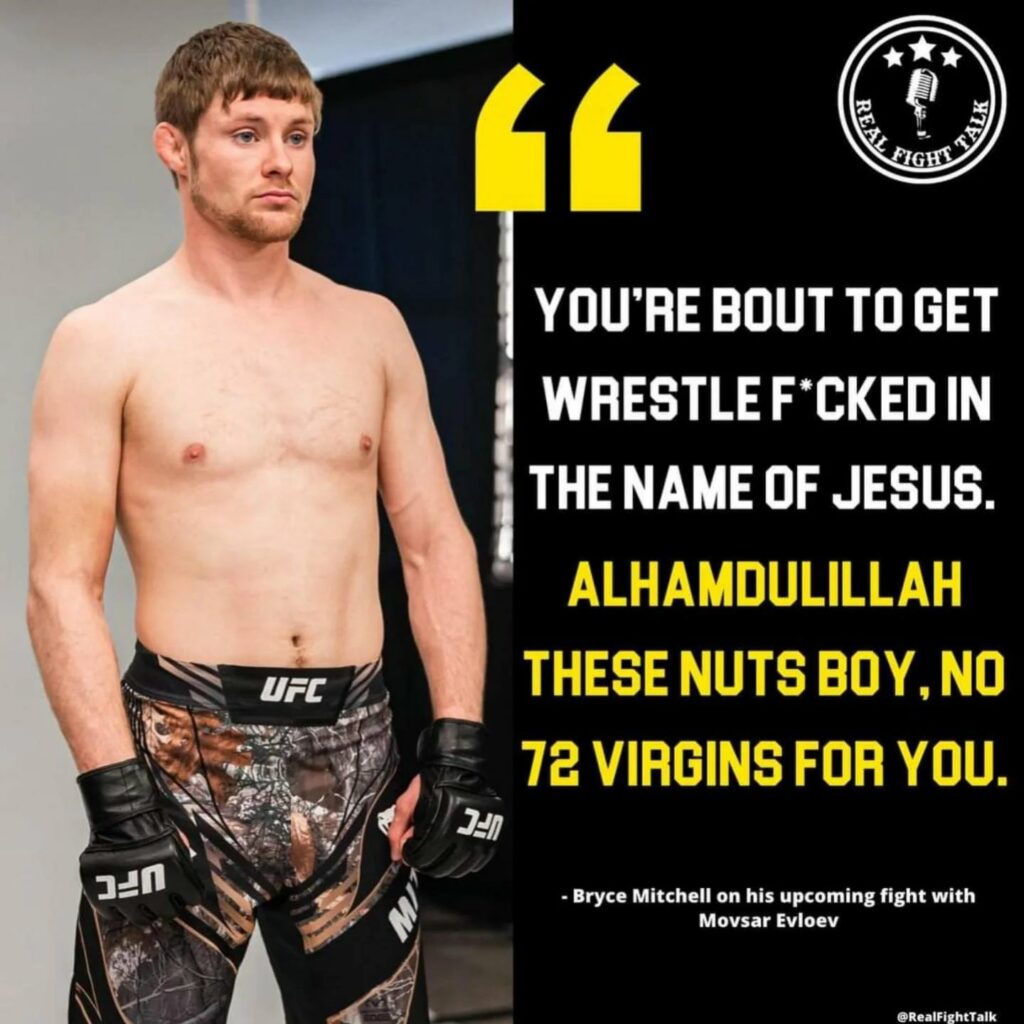 Mithcell was very unamused with the contents of the post and went so far as to film a video response explaining that none of this is true. Which – I mean really – did anyone think it was?

“What’s up? Your bunch of people are asking me if I made some quote about Muslims and this and that, and then I didn’t say nothing about disrespecting nobody’s religion, right?”
” I say, nope, nope, no, no, sir.”
” I see my beliefs. ”
“That’s right. For over 15 years. 15 years. Ever seen that? That’s right. That’s right. Yeah. He loves everybody.”

“You ought to be ashamed of yourself. That’s right. Yeah. I’m sorry. Every last one of you. Yeah, that’s right,”

Earlier last month Mitchell went on a rant targeting electric vehicles presumably not knowing that Tesla’s Elon Musk was on the board of UFC’s parent company Endeavor and is still a major shareholder.

” If you like driving electric cars just because you like them, hey, that’s fine. But don’t tell me it’s environmentally friendly. You’re a stupid motherf**ker if you do. Because that electric cars runs off of coal and to mine coal, it takes diesel equipment.”

Back in June,  Elon Musk filed a Form 4 with the Securities Exchange Commission, converting his options at Endeavor Group Holdings, Inc. to 7,583 shares . Elon Musk is part of Endeavor’s board. However, Musk notified the company that he would be resigning from its board by June 30, 2022,

“We thank Elon Musk for his commitment to Endeavor through our first year as a public company, in which he contributed meaningfully to our long-term strategy and vision for the future of sports and entertainment,” a company spokesperson said in a statement provided to Deadline. “We know he has a lot of demands and little time, and we appreciate the support he provided us.”

Mitchell has previously been outspoken on his hatred of NASA in addition to trying to perform some sort of an ‘educational’ act in front of a confederate flag while feature on the MMA Hour.

It was recently revealed that Bryce Mitchell and Movsar Evloev would take part in a featherweight main event on the November 5th card.