Yesterday was National Dog day but that didn’t stop a Bareknuckle FC competitor from letting things get superbly awkward at the face offs.

Tony Loco Soto is booked to face Joshua Morales at BKFC 28 ALBUQUERQUE set to happen tonight in New Mexico. Tony Loco Soto and Joshua Morales had one of the strangest face offs of all time thank to the presence of Morales’ dog. Loco was so ‘inspired’ by the dog’s presence he threatened to copulate with it after defeating Morales.

This raised quite a few eyebrows as one of those unscripted moments that left the audience in disbelief. To make the whole thing even more odd and awkward BKFC production team cut to the dog afterwards delivering a must see tv moment. 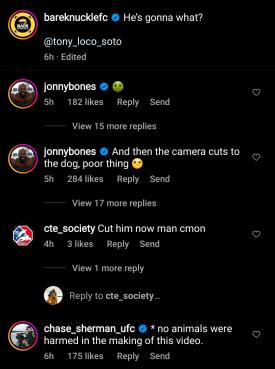 Another UFC athlete, Chase Sherman, was bemused by the video and joked about it afterwards.

And if this has you feeling all kinds of awkward here’s a palate cleanser. This past week Luke Rockhold weighed in in the company of his beloved pooch.

And luckily Paulo Costa also loves dogs so he failed to capitalize on this ‘opportunity’ to get a rise.

Doggy in my corner ❤️ pic.twitter.com/1ULfL20naY

Elsewhere on the BKFC 28 card there was another super intense staredown. This time between Christine Ferea and Taylor Starling. The two headliners got into each others faces with some slightly more wholesome intimidation tactics.

Starling faced some criticism over her only fans in lead up to the event. She fired back saying:

‘Before my fan site, I was working a full-time job, and I had two part-time jobs where I would have to work on the weekends, and then somehow manage to find time to train in-between that. The fan site was not something I was super eager to d’ Starling told in an interview.

“I’m able to train full-time, my kids are fed, my bills are paid, and I still get to continue to do what I love. Why would I give a s*** what anyone has to say about that?”