Raul Rosas Jr. has a lot of media attention thanks to his youth and skills.

In the prelims bout on the UFC 282 card, Rosas Jr. successfully submitted Jay Perrin in the first round. Rosas Jr.’s victory made him the youngest ever athlete to win in UFC. After his win, Rosas Jr. said that hopes to compete for the 135-pound title against Aljamain Sterling.

“Like, I said, I’m not saying stuff just to say it. Like everything I say is true, and like, people don’t believe in me. But I believe in myself. And I’m just out there and proving it.”

“Like, that’s probably not going to happen [a fight with Aljamain Sterling next], because people don’t know if I could actually really do that [beat him]. I know I can, so I’m just staying active, I’m gonna keep finishing everybody in an impressive way. And show everybody I’m ready to go for that title.”

Aljamain Sterling responded to the news on Twitter with a snarky reaction: 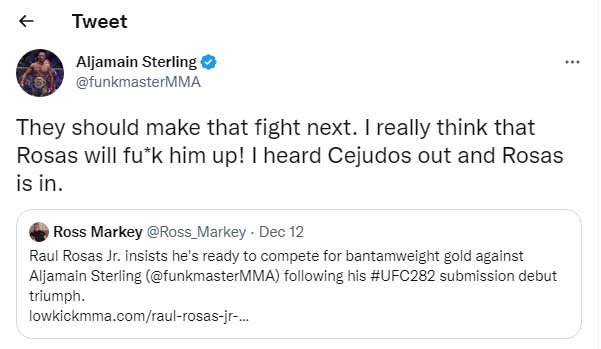 Sterling juxtaposed the clout of Henry Cejudos UFC championship wins to the inexperience of Rosas – but it didn’t end there.

In a video response, Sterling outlined he’d met Rosas and was unimpressed with his behavior during a jiu-jitsu class the two happened to have attended together.

“I want to grapple him again.”

“I grappled him twice. The second time was like I went there to drill. And then they did, like, just king of the mat. And then he started, like I told him like I was taking the easy for the day, just trying to, like, get a sweat in and not go crazy.”

“And he was, like, trying to pass my guard, but doing like this DJ on my head, I was like, Why? I start, I laugh, like, chuckle. Okay. So that’s being a little bit of a kind of like a little, little prick right now.”

“I don’t know, like, I barely know this kid, but I look over to the right and there’s his dad with the f***ing camera.”

“You guys have champions that come here, you guys. It’s completely disrespectful. That’s just a s*itty personality. You would think a kid would have had a little bit more… Not a kid.”

“But you think they would have. Someone would have taught him, like, some etiquette, like going into gyms and stuff and working out with other people, but I guess not.”