Ali Abdelaziz, a top MMA manager, has some requests for TJ Dillashaw.

Dillashaw seems to be in good shape for a shot at the UFC Bantamweight Championship shortly. However, not everyone is delighted with the prospect of Dillashaw taking the next shot at 135-pound gold. Those who oppose it point to Dillashaw’s two-year punishment for using EPO. 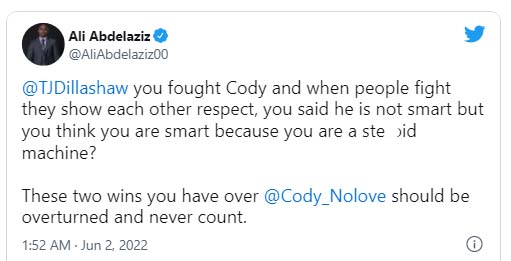 “These two wins you have over @Cody_Nolove should be overturned and never count.”

Abdelaziz’s remark was most likely prompted by Dillashaw’s recent attack on Cody Garbrandt. Dillashaw said that Cody isn’t the most intelligent person in the cage.

In July 2021, Dillashaw made a successful comeback after his ban. He won a split decision against Cory Sandhagen.

In April, Dillashaw successfully defended his title against Petr Yan in their championship unification rematch. After the bout, reigning champion Aljamain Sterling called Dillashaw out.

In response, Dillashaw recently said on Submission Radio that Aljamain Sterling does not pose a danger to him.

“He’s definitely got his strengths, he’s got his annoyance with fighting, he’s awkward and what not, right, but he’s just not very threatening.”

Dillashaw told Submission Radio, “I could f*****g go in there and fight him with my hands down and not worry about getting knocked out because he doesn’t pack a punch whatsoever.”

“So it’s not a very nerve-wracking fight to go into. Think about the worst things that can happen is, you know, and Sterling’s not that guy so this is dealing with what he does good, to be honest, you know, he’s a world champion, you can’t take that away from him.”

“Maybe the first time he got it was a little bit of bullshit, especially with the way he acted but he won the second fight fair and square.”

But Abdelaziz does raise an interesting point – if a blood panel of a competitor comes in positive for PEDs- should the previous results also be re-examined? One thing’s for certain, it’s hard to picture Cody Garbrandt getting his chin back.