Alexandr Romanov will be clashing against Chase Sherman this weekend. The two were initially scheduled to meet the last weekend but the fight was scratched on short notice and moved for the next weekend.

Romanov opened as a huge favorite – among the biggest in UFC history with mean odds peaking at -2300. 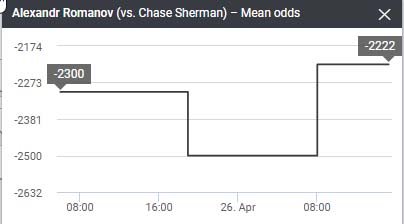 Romanov hails from Moldovia and has been with the promotion as far back as September of 2020. In UFC he’s amounted 4 out of his 15 victories.

Some of the men that have cancelled bouts against him are Tanner Boser, Ilir Latifi, Marcin Tybura and Marcos Rogerio de Lima. Romanov is still unranked.

Another reason for Romanov getting the public vote of confidence is because Chase Sherman is on a big losing streak. Sherman lost last 3. 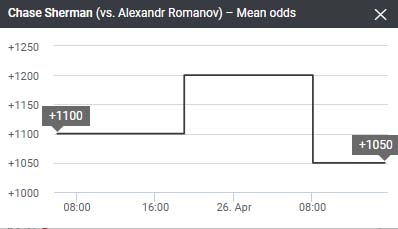 Sherman last won in 2020 against Ike Villanueva. He’s since lost to Andrei Arlovski, Parker Porter and Jake Collier, one via submission and two via decision. The odds have moved significantly since the first time the battle between the two was scheduled. The first time the odds were +700 vs -1430 but something happened between opening and closing and they moved to +700 vs -2500 where they lingered on before slightly dropping. Regardless of the slight drop this is the biggest odds disparity the UFC has had in recent history.

Even Mike Jackson (who was brought in to the UFC in order to give CM Punk a fair chance) had his odds be slightly more favorable. Mike Jackson was +800 while Dean Barry was -800 – not that it mattered after his two fouls. As usual, MMA can be fairly hard to predict so it’s interesting to see these odds in an astronomical range.