Argentina’s Sergio Aguero tried to placate Alvarez and get him to subdue his visceral reaction, but it didn’t go great.

Aguero politely contacted Alvarez and explained that it’s very common for football players to put jerseys on the floor after a match. He also explained how Messi accidentally hit the jersey.

“Mr Canelo, don’t look for excuses or problems, surely you don’t know about soccer and what happens in a locker room. The shirts are always on the floor after the games are over due to sweat and then if you see well, he makes the movement to remove the booty and accidentally hits it.” Aguero explained in Spanish. 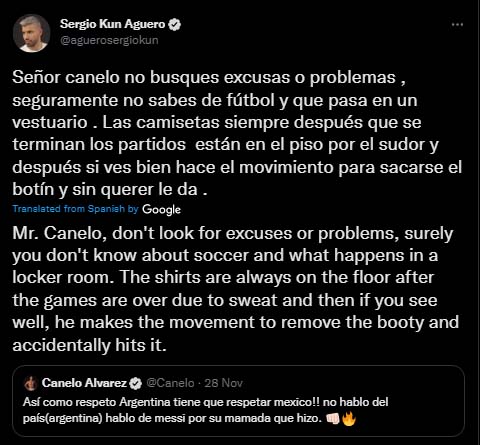 Sadly, even the polite explanation means nothing to Alvarez. He responded to Aguero’s tweet completely trash talking him. 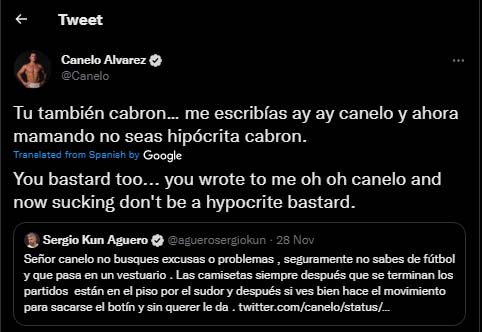 Now Aguero has revealed that it didn’t stay on that – apparently Alvarez had sent him an angry voice message calling him a series of expletives.

“Sergio Aguero has revealed that Canelo Alvarez sent him an angry voice note during the Lionel Messi feud: “Do you know how much I s*** myself? When I saw my WhatsApp and I read *Canelo Audio Message* I said, ‘Oh s***’. He told me, ‘You s***head, I liked you, asshole.'” – Michael Benson revealed on twitter.