Shoey’s are all the rage as of late thanks to the rising star Tai Tuivasa. The custom of drinking from a shoe comes from the decadent custom of consuming champagne from a lady’s slipper that first became popular in the early 20th century. While it has waned in popularity in most of the world it’s still something that’s seen in Australia.

What you might not know is that Tuivasa was born in Sydney to an Indigenous Australian (Wiradjuri) mother, and a Samoan father. He has kept the custom going and popularized it in the UFC. Recently even UFC president Dana White obliged a request from Tuivasa to celebrate his victory.

But what’s perhaps more interesting is that UFC Middleweight champion’s mother is violently opposed to the custom. Adesanya recently shared an exchange he had with her begging him to abstain from the celebratory tradition.

“Son, for God’s sake, please DON’T DO THIS AGAIN! You have a sensitive tummy, I know it is your show but not healthy.

“Be you as you always do, don’t copy bad, unhealthy habit. Infection of the intestine can be fatal.” 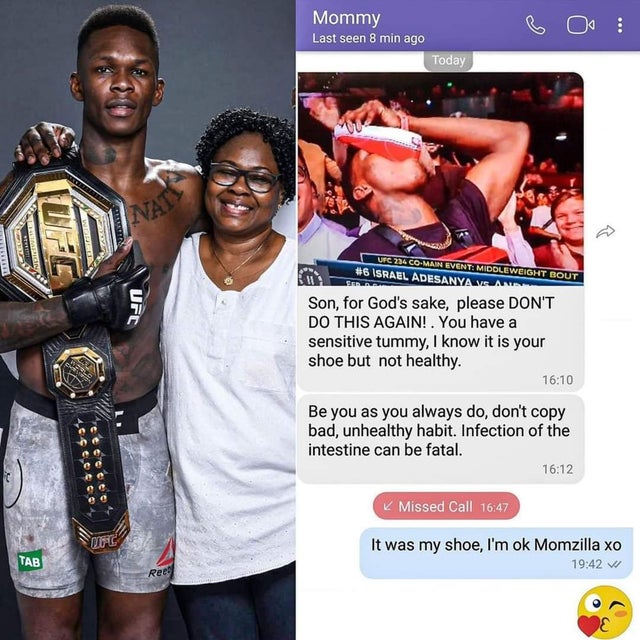 Adesanya was asked about a shoey during UFC 271.

I asked Israel Adesanya & Robert Whittaker if they’d do a shoey on Saturday night. Here was their response. @MiddleEasy pic.twitter.com/XgsdWNmcnD