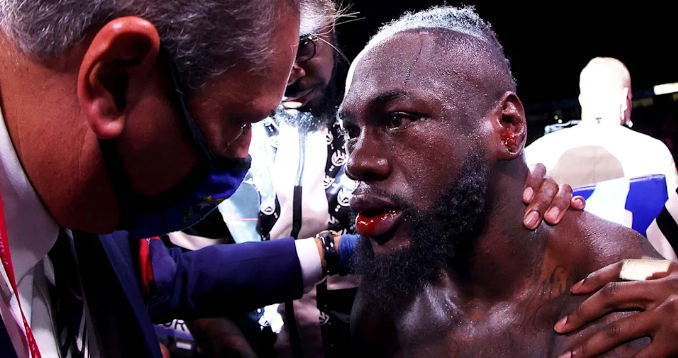 Deontay Wilder was one half of one of the most exciting boxing fights of the decade. The African American boxer put on a great performance and threatened Tyson Fury Repeatedly. Ultimately there were 5 knock downs of the fight, 3 for Fury and 2 for Wilder. The last one decided it for Fury.

But before that – and some time after round 7 the commentary team started observing how Wilder is repeatedly touching his wrist, and that there may be something wrong with his hand. The commentary team was spot on, as it turns out. Wilder’s coach recently shared:

“We saw the doctor afterward, everything was cool,” Scott said (via Boxing Scene). “He’s got a busted lip, he broke his hand, broke his finger or knuckle. But life goes on.”

“I’ve always said [Fury’s] not good … he’s very good and damn-near great,” Scott continued. “After tonight I’m gonna consider him a great fighter. Much respect … [Wilder] was great, Fury was greater. The best man won. We almost beat him. This was a hell of an experience.”

“Deontay is talking about doing nothing with boxing for quite some time,” Scott said. “I want to get him some good rest, especially after this fight because even after the last fight, he was so worked up over time, he really never got to rest. He deserved a good rest. I’m going to make sure he gets it now.”

Wilder’s corner also seemed to accuse Fury of throwing Rabbit punches during the fight. For those unfamiliar, rabbit punch is a punch is a punch that lands on the back of the head or neck. It is an illegal strike in most combat sports due to its proximity to the brainstem, which makes it dangerous and potentially lethal. The name comes from the way hunters kill rabbits with a quick strike to the back of the head.

Wilder was visibly gassed in the second-half of the fight after he had been floored multiple times by the ‘Gypsy King’.

These types of strikes were observed in a previous fight:

Ultimately Wilder refused to shake Fury’s hand after the fact in spite of Fury having some kind words for him:

“I’m not going to make any excuses, Wilder is a top fighter,” said Fury.

“He gave me a real run for my money tonight, and I always said I’m the best in the world and he’s the second best.

“He’s got no love for me, Deontay Wilder, because you know why, because I beat him three times.

“I’m a sportsman. I went over to him to show some love and respect and he didn’t want to give it back. That’s his problem.”